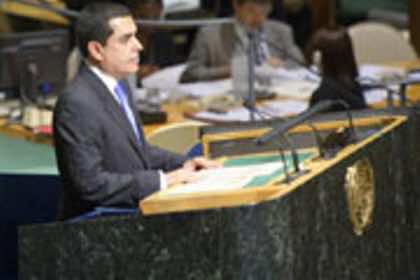 The U.N. General Assembly on Wednesday elected as its next president veteran Qatari diplomat Nassir Abdulaziz al-Nasser, who U.N. diplomats say is unlikely to cause trouble for Western powers.

Nasser, who has been Qatar’s ambassador to the United Nations since 1998, will replace Joseph Deiss of Switzerland. Previously Qatar’s envoy to Canada, Brazil, Cuba and other countries, he will take over the U.N. job in mid-September.

Nasser told the the 192-nation General Assembly after his unanimous election that he would act as a bridge between developed, developing and least-developed nations.

He added that he would focus on “building consensus on major global challenges facing the world today.” He said those included armed conflicts, climate change, tackling the financial crisis, poverty and responding to natural disasters.

The post of president of the General Assembly has little real power but a high profile in chairing the annual September gathering of world leaders in New York. He or she also represents the assembly on foreign tours.

U.N. diplomats say Nasser is a competent diplomat who will likely follow in the footsteps of Deiss, who has not ruffled Western feathers the way his two predecessors did.

The General Assembly job rotates between geographic areas. This year it is the turn of the Asia Group, which includes countries in Asia and the Middle East.

Until his election as President of the 66th session of the General Assembly, Mr. Al-Nasser has been Ambassador Extraordinary and Plenipotentiary, Permanent Representative of the State of Qatar to the United Nations in New York since 11 September 1998.  He had been posted to the Permanent Mission as Minister Plenipotentiary from October 1986- January 1993.

He has also served as Ambassador Extraordinary and Plenipotentiary of the State of Qatar to the Hashemite Kingdom of Jordan from February 1993 to September 1998. Since then, he has been accredited as Ambassador (Non-Resident) of the State of Qatar variably to the following countries: Paraguay, Uruguay, Colombia, Panama, Nicaragua and Belize, Canada, Argentina, Brazil and Cuba.

While serving as Ambassador of the State of Qatar, Mr. Al-Nasser represented his country and participated in its official delegations to numerous international and regional conferences, fora  and meetings. He also represented the State of Qatar in a number of official ceremonies in different countries around the world.

During the non-permanent membership of the State of Qatar in the United Nations Security Council in 2006 and 2007, Ambassador Al-Nasser was the his country’s Representative on the Council, and presided over the Council during the particularly busy month of December 2006.

In 2004, he also served as the Chairman of the Group of 77 and China at the United Nations in New York.

In addition to his diplomatic career, Mr. Al-Nasser has been participated in numerous meetings and civil society functions. He serves on the board of a number of institutions. In January 2010, he became a Member of the Board of Advisors of the New York University Center for Dialogues, and in October 2009, he became an Honorary Fellow of the Foreign Policy Association in New York, among others.

He has received an honourary doctorate in international affairs from the Government of China through Chongqing University (Nov. 2007). Honourary decorations from numerous Governments were conferred on him, as well as.

Mr. Al-Nasser is fluent in Arabic and English. He is married to Muna Rihani and has one son, Abdulaziz.