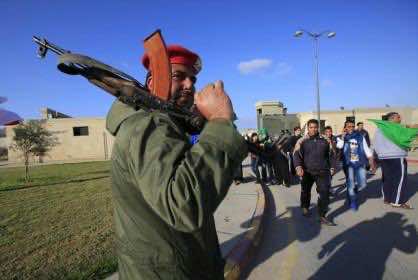 A ship carrying 49 people fleeing the conflict in Libya arrived at a Tunisian port Thursday, including 19 police and soldiers who defected from the regime in Tripoli, the TAP news agency said.

The ship docked at the southern El Ketef port, the landing spot for many Libyans who have fled the unrest in recent months, Tunisia’s official news service reported.

Three defectors told TAP they quit the security services of embattled dictator Moamer Kadhafi because they did not want to shoot at their compatriots.

On Tuesday, 38 Libyan nationals, including some military officers, who fled the conflict in their country entered Tunisia, while on June 14, another 27 Libyan soldiers arrived at El Ketef.

The United Nations High Commissioner for Refugees (UNHCR) estimates there are more than 70,000 Libyans currently in Tunisia.