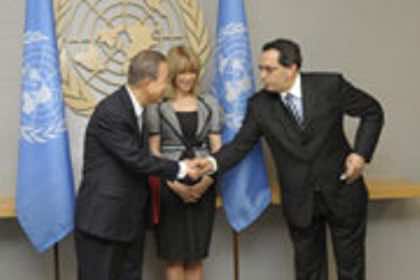 Earlier this year, the country witnessed a popular uprising – the first of many across North Africa and the Middle East calling for democratic reforms – that removed the long-standing regime of Zine El Abidine Ben Ali.

Tunisia’s revolution was hailed by Secretary-General Ban Ki-moon as the spark that lit “the profound and dramatic changes” sweeping the Arab world.

In remarks today on the occasion of Tunisia’s deposit of its instrument of accession to the Rome Statute, Mr. Ban said that as the first North African nation to become a party to the ICC, Tunisia had shown strong leadership in the common fight to end impunity.

“This significant step is particularly important in light of the fundamental changes that have occurred in Tunisia this year,” he stated, adding that the move also brings the world closer to the goal of universal accession to the 1998 Rome Statute.

“It brings us closer to a true age of accountability,” said the Secretary-General.

Ambassador Christian Wenaweser of Liechtenstein, the President of the Assembly of States Parties to the Rome Statute, welcomed Tunisia’s accession, calling this a “historic” day.

“I am very pleased that the Government of Tunisia at the beginning of a new chapter in the history of its country has chosen to send this very strong message,” he said, adding that he hopes other countries will follow its example.

The ICC, which is based in The Hague, was set up in 2002 after the Statute took effect that year when it passed a total of 60 ratifications. It is currently investigating six situations: Uganda, Democratic Republic of the Congo (DRC), the Darfur region in western Sudan, the Central African Republic (CAR), Kenya and Libya.