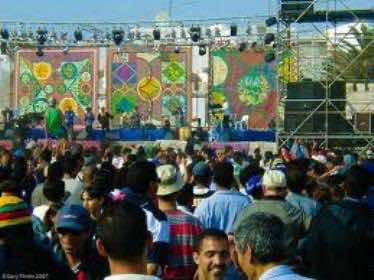 The picturesque port of Essaouira, painted in blue and white, is a tourist favourite and the perfect destination for a festival devoted to the feats of the Gnaouas, best known for their tasselled hats, which spin wildly as the musicians rock. Yesterday the Gnaoua Festival kicked off. It runs until the 26th

Perhaps North Africa’s biggest music festival, the Gnaoua and World Music Festival has been going on for over a decade, and last year drew 400,000 fans to Essaouira.

Now in its 14th year, the festival is not surprisingly more stylistically divergent than western festivals, not only in the styles of music represented, but the number of instruments played. Numerous open-air stages host Gnaoua musicians as well as numerous international acts.

Gnaouas are musical brotherhoods; more than a band, less than an orchestra. They are descendants of African slaves who were transported across Africa’s northern deserts to serve sultans and wealthy families. And given that one can trace the musical lineage of the banjo and other instruments viewed as “traditionally American,” the styles of music may be closer to the blues and gospel than the sounds of Morocco’s neighbors 3,000 miles to the east.

Originating through this cross-pollination of African magic and Islamic rituals, the Gnaoua brotherhoods form a structured unit around a master or Malaam. He leads the music and dancing until the participants are in a trance induced by the mesmeric rhythms of the drums, the guenbri (a form of lute) and the hand-held garagab (metal castanets). During religious ceremonies, Gnaouas have been known to impale themselves on swords or beat their heads with iron balls without sustaining visible external injury.

Faint-hearted visitors have nothing to fear, the Essaouira Festival does not feature such extreme performances: the programme focuses on the purely musical elements of Gnaoua tradition and its influence on African-inspired musicians.

So will the music effect you? Yes, hopefully it will! In a Gnaoua song, one phrase or a few lines are repeated over and over throughout a particular song though the song may last a long time. In fact, a song may last several hours non-stop. The norm, though, is that what seems to the unintiniated to be one long song is actually a series of chants, which has to do with describing the various spirits (in Arabic mlouk (sing. melk)), so what seems to be a 20 minute piece may be a whole series of pieces, a suite for Sidi Moussa, Sidi Hamou, Sidi Mimoun or the others. But because they are suited for adepts in a state of trance, they go on and on, and have the effect, that they provoke trance from different angles.

The melodic language of the stringed instrument is closely related to their vocal music and to their speech patterns, as is the case in much African music. It is a language that emphasizes on the tonic and fifth, with quavering pitch-play, especially pitch-flattening, around the third, the fifth, and sometimes the seventh. This is the language of the blues.

First published: The View from Fez