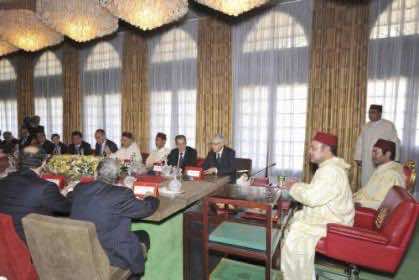 At a time when, as the experts assembled at a symposium earlier this month hosted by the Atlantic Council’s Ansari Africa Center noted, the fate of both the “Arab Spring” in general and the North African revolutions in particular remain far from certain, Morocco has made an audacious bet with the new constitution that King Mohammed VI unveiled in a televised speech last Friday. If the proposed charter is approved by voters in a referendum next month, the country will once again prove itself to be an exception, both in the Arab world and on the African continent, where integral transformation voluntarily undertaken and carried out both with respect for history, religion, and culture, and at an appropriate speed can offer a path to the future that balances the competing demands of stability and openness to change.

Morocco is no stranger to reform, with many already underway during the latter part of the reign of the late King Hassan II. These, however, were vastly expanded under an ambitious program put in motion when the current monarch succeeded his father nearly twelve years ago. In one of his first acts of office, Mohammed created an independent commission to compensate those who had suffered arbitrary detention and other human rights abuses under his father. The panel, the first of its kind in the region, heard more than 7,000 cases and awarded more than $100 million in reparation payments. In contrast to its Maghrebi neighbors in what hitherto have been de facto one-party states in Algeria, Tunisia, and Egypt—to say nothing of the bizarre political system in Libya—Morocco has already achieved an impressive degree of political pluralism, with a dozen or so major parties representing every possible tendency on the policy spectrum between moderate Islamists to the secular center-left. There is a free press and a climate of respect for human rights. The reform of the family code (Moudawana) which was championed by the king—who invoked his religious authority as Amir al-Mu’minin (“Commander of the Faithful”) descended from the Prophet Muhammad against conservative opponents of change—significantly advanced women’s rights.

The constitutional changes now being proposed are even more dramatic. The new framework shifts power significantly away from the monarch—described in the royal speech as the “Citizen King”—to a prime minister who, like his homologues in other parliamentary governments, will be the leader of the party that wins the most legislative seats in elections. The parliament itself will be strengthened with expanded powers and will also be responsible for passing legislation to further devolve power to the country’s regions. An independent judiciary shorn of special tribunals for government officials will ensure the equality of citizens before the law. In a first for an Arab country, international human rights conventions, including the ones covering gender equality, will be explicitly given preeminence over national legislation in the constitution.

One of the mistakes made by pundits in recent months, riveted by the fate of the Tunisian fruit vendor Mohamed Bouazizi, whose self-immolation literally sparked the Jasmine Revolution and the wave of protests across North Africa and the Middle East, is to overemphasize the role of economic marginalization in spurring the dissent. If this were the case, the Moroccan royal family would have been sent packing long before the Ben Alis and Mubaraks. GDP per capita (purchasing power parity) in the kingdom is three-fourths of what it is in Egypt and barely half of what it is in Tunisia. Whereas both Egypt and Tunisia have a large, well-educated middle class, the literacy rate in Morocco, while improving substantially in recent years, still hovers at just above 50 percent. The average Moroccan woman can expect to have six fewer years of schooling than her Tunisian sister and two years less than her Egyptian sister. Morocco has a higher infant mortality rate than both Egypt and Tunisia and a lower life expectancy than the latter.

To the contrary, the events of the past few months are best understood as what Moroccan-American political scientist Anouar Boukhars termed in a recent eponymous journal article the “Arab Revolutions for Dignity.” And what King Mohammed and the Moroccan government are betting on is that by meeting the legitimate aspirations of ordinary citizens for a real opportunity to have a say in their own government, they can nip the extremist temptation at the bud while harnessing the youthful populace’s energies to advance the country’s growth and development, politically, economically, and socially.

It is a gamble that has drawn favorable attention not only from the Obama administration, where the State Department spokesman said it was “encouraged by the proposals” put forth last week, but also among America’s European allies. French President Nicolas Sarkozy hailed a “resolute and attentive process” that clears the way for a “profound, peaceful, and modern transformation of Moroccan institutions and society, while the European Commission in Brussels praised it as “a significant step [that] signals a clear commitment to democracy and respect for human rights.” It such is the case, then the United States and its European partners would do well to invest their resources, political and economic, in supporting Morocco as it undertakes the necessary—but far from risk-free—transition to a more open and democratic political process. While Morocco does not seek to position itself as a model for others, the path it is undertaking is one which, if its neighbors followed, would prove most likely to obtain for the peoples of the Middle East and Africa the freedom, dignity, and progress they aspire to and to secure for the international community the sustainable stability it needs in a geostrategically important region. That is near-certain bet.