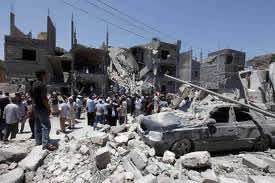 NATO missiles have hit a site in Libya used by Muammar Gaddafi’s forces to stockpile military supplies and vehicles, the alliance said on Saturday, adding it was unaware of 15 civilian deaths reported by state media.

The attack late on Friday was the second within hours on what NATO said were clearly identified military targets in the coastal city of Brega, around 200 km (130 miles) west of the rebel stronghold of Benghazi.

Libyan state television said a local bakery and a restaurant had been hit, wounding 20 people in addition to the 15 dead. State news agency Jana said a strike in the same area earlier on Friday had killed five civilians.

“We have no indications of any civilian casualties in connection to these strikes,” a NATO official said.

“What we know is that the buildings we hit were occupied and used by pro-Gaddafi forces to direct attacks against civilians around Ajdabiya,” the official said of a nearby rebel-held town.

“Unlike the pro-Gaddafi forces, we go to great lengths to reduce the possibility of any civilian casualties.”

Separately, a Reuters correspondent in the capital Tripoli heard a total of four loud explosions as jets flew overhead on two occasions on Saturday. The blasts appeared to come from the eastern suburb of Tajura. Several other explosions shook the city late on Friday.

NATO acknowledged for the first time last week that one of its raids in a three-month campaign could have caused civilian casualties, prompting concerns within the alliance.

Italian Foreign Minister Franco Frattini said NATO’s credibility was at stake and called for a suspension in the campaign — an appeal that was swiftly knocked down at NATO headquarters and by allies, including France and Britain.

In a televised address this week, Gaddafi branded NATO “murderers” and vowed to fight to the death to stay in power.

The bombing campaign of the NATO-led coalition is into its fourth month in support of Libyan rebels seeking to end Gaddafi’s 41-year-old rule.

Recent progress has been slow and rebels have taken many casualties, but there are signs Gaddafi’s forces are also being stretched and the local economy hit by international sanctions.

In what would be a morale-booster for rebels if they hear about it, four members of Libya’s national football team and 13 other football figures defected to rebels, the BBC reported.