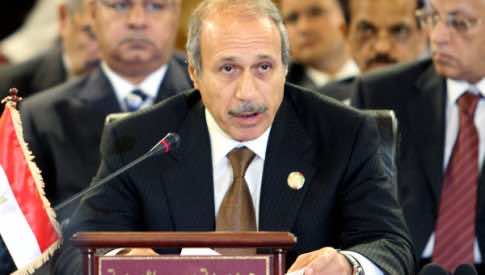 Families of Egyptians killed and injured in protests that ousted Hosni Mubarak hurled stones at police vehicles outside the court where the former interior minister was being tried on Sunday, witnesses said.

“The people want the execution of the killer,” dozens of protesters chanted outside the criminal court in a Cairo suburb.

The former minister, Habib al-Adli, and six other former senior officials are charged with killing pro-democracy protesters in the uprising in which more than 840 people died.

The court said the next hearing will be on July 25.

“From Aswan to Alexandria, we will hold the Interior Ministry to account,” the protesters chanted, while some threw stones. Military police were also at the scene.

Adli was reviled by many Egyptians for the tough tactics used to suppress any protests against Mubarak, who was driven from office on Feb. 11.

Police used batons, teargas, water cannon and live ammunition against protesters in the first days of the 18-day uprising before they were ordered off the streets and the army moved in to take control. Mubarak later handed power to an army council.

The former president, now hospitalised, has also been charged with killing protesters and could face the death penalty. Mubarak’s trial starts on Aug. 3.