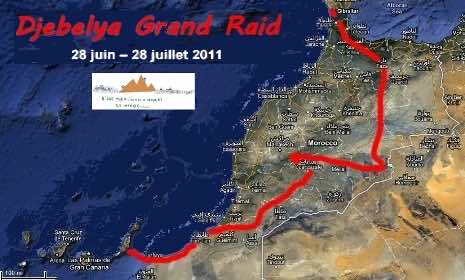 Morocco’s first Djebelya Grand Raid is an extreme endurance test. Competitors have 200 hours to cover 2500km throughout Morocco, over four weeks, from 28 June to 28 July. Events include a 120km kayak across the Atlantic from the Canary Islands to Tarfaya in southern Morocco, 2100km of mountain biking, a 40km desert trek, 150km on horseback, a 20km swim and an optional mountain climb.

Billed as ‘from one sea to the other’ the Djebelya Grand Raid will end at Cabo Negro on the Mediterranean, not far from Tangier after traversing the High Atlas mountains and the Sahara. The project was initiated by Mounir Essayegh, a natural sports aficionado, and Arnaud Mollaret, a horse riding teacher in Casablanca.

So for a month, this competition which aims to lead the raiders from a sea to another, using only natural sports (ie no polluting, motorised vehicles), will cross more than 13 provinces in 24 stages. Presented as a “race against oneself” which stresses endurance, the objective of the raid is also to promote citizen tourism through natural sports. It highlights the natural and cultural riches of Morocco, emphasising green tourism and our social and environmental responsibility. Children in rural schools along the way will benefit through the NGO Amis des Ecoles.