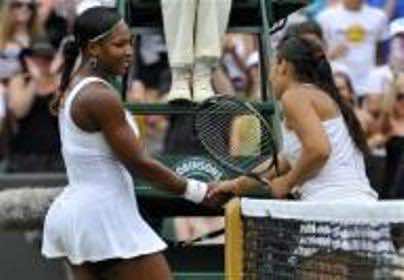 Defending champion Serena Williams saved four match points before losing 6-3 7-6 to Frenchwoman Marion Bartoli in the fourth round at Wimbledon on Monday.

The American, seeded seventh after serious health problems, struggled throughout against the ninth-seeded Frenchwoman, making a succession of unforced errors on Court One.

Bartoli took the first set on her sixth set point and she continued to move the 13-times grand slam champion ruthlessly around the court to move to the brink of victory.

She had three match-points in the 12th game of the second set but Williams showed all her battling qualities and great composure to save them and force a tiebreak.

Bartoli continued to serve strongly and she earned another two match points, the first of which Williams saved with an ace, but the Frenchwoman took the second to take the tiebreak 8-6.

“Beating Serena is a dream come true, she is one of the greatest champions of the open era,” Bartoli said in a televised interview.

“It was not easy mentally but I did it and I am very happy. She is very imposing. If you look at her it is difficult to handle the pressure so I was just trying to focus on my own game.”