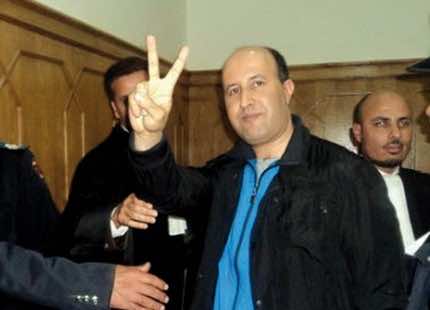 Rachid Nini, a loudmouthed journalist, is jailed in Morocco by the very government whose agenda he used to serve.

Some Moroccans love him; others loathe him. But they all read Rachid Nini, until recently the editor, publisher, and star columnist of Al-Massae, Morocco’s largest newspaper.

In June, Nini became an unlikely free-speech martyr when he was convicted of being a “threat to national security” and sentenced to a year in prison. The story of Nini’s phenomenal rise and fall began in 1997. Then an unremarkable freelance columnist for the center-right newspaper Al-Alam, Nini traveled to the Canary Islands for a cultural conference and decided to remain illegally in Spain. For three years, he worked odd jobs in different cities and, upon his return to Morocco in 2000, published a wildly successful memoir of his life, Diary of an Illegal. He also joined the staff at Assabah, writing a column that became so popular that enterprising street vendors photocopied it to sell it separately. In 2006, buoyed by this success, Nini launched Al-Massae, a newspaper that very quickly outsold all others in the country.

The key to Nini’s popularity is his style, which combines the simplicity of Glenn Beck, the combativeness of Bill O’Reilly, and the humor of Dennis Miller. In his column, “Shouf Tshouf,” he mixes standard and colloquial Arabic, making him accessible to most Moroccans. His sarcasm is aimed at corrupt politicians and greedy officials, but also at liberals, feminists, Jews, homosexuals, and other real or imagined dangers to the nation.

Nini’s columns are often full of hate, but swaddled in piety and nationalism. He has said that Abdellah Taia, a prominent novelist who is gay, shouldn’t have been interviewed on state-sponsored TV; he has accused his rival Ahmed Reda Benchemsi, editor of the magazine TelQuel, of “mocking God and his prophet” for daring to publish a collection of jokes about Islam. And two years ago, Nini pointed the finger at Jean-Louis Servan Schreiber, a Jewish shareholder in Benchemsi’s magazine, suggesting that Schreiber was responsible for its liberal editorial line. Nini’s populist columns earned him the wrath of many, but he remained popular with large sections of the reading public because of his searing criticism of greed and corruption.

Eventually Nini’s bombastic claims landed him in trouble. In April 2008 he alleged in a column that a public prosecutor in the town of Ksar el Kebir had attended a “gay wedding” held in the house of a trafficker. There was never a gay wedding, and the town’s four public prosecutors successfully sued him for libel. The $800,000 fine imposed on him was the largest libel judgment ever awarded in the country. Nini’s reply? This was “judicial terrorism.” Like many journalists in Morocco, he soon became a frequent visitor of police stations and courtrooms, and has several libel lawsuits still pending against him. But despite the onerous fines, Nini somehow managed to hold onto his newspaper.

Earlier this year he got in trouble again when he criticized Morocco’s intelligence service, the redoubtable Direction de la Surveillance du Territoire, saying it should be put under parliamentary oversight. The government’s reaction was swift: Nini was charged with “denigrating judicial rulings” and “compromising the security and safety of the homeland and citizens.” On June 9, he was convicted and sentenced to prison.

The turn of events held plenty of irony. Nini, often the recipient of score-settling government leaks, ended up jailed by the same government whose agenda he sometimes served. And the people who rose to his defense—human-rights activists and journalists—were the same people he often attacked in his writings.

Nini’s incarceration poses a larger problem for Morocco, however. Early last spring the king responded to the widespread demands for change by swiftly announcing constitutional reforms he said would promote separation of powers and the rule of law. But Nini was convicted under the penal code, not under the press code. A one-year jail sentence for an article is the sort of detail that messes up the smooth democratic façade Morocco wants to present to the rest of the world.

Lalami is a writer and professor. She lives in Los Angeles.