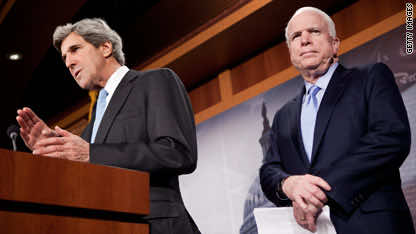 Two top US senators John McCain and John Kerry led a high-level delegation of elected officials and business leaders, including chief executives of major US companies, such as General Electric visited Egypt on Sunday.

During its 2-day visit to Egypt, the delegation met with Field Marshal Hussein Tantawi head of Egypt’s Supreme Council of the Armed Forces (SCAF), Prime Minister Sharaf as well as other top officials.

John Kerry said that past US policy mistakes would not be repeated with Egypt.

When asked about the economic assistance the United States would grant Egypt , Kerry said that it would be unconditional. However, he indicated that it is the right of American taxpayers to ensure that any assistance given to foreign countries is properly spent.

Kerry said that  “[We use] the way the IMF and the World Bank do business …as being an international institutions they have to show that the money is well spent.”However, he did not detail the level of this “involvement”.

“We are not here to dictate, but the US has been careful in aid allocations in countries all over the world, and not Egypt alone. ” he added.