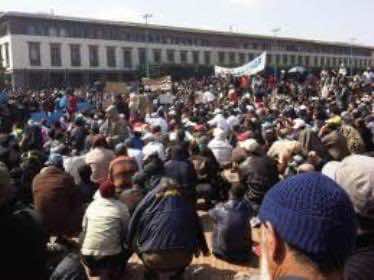 Key events in the north African state of Morocco, where a referendum takes place on Friday on proposals for constitutional change, against a background of revolt in the Arab world.

– February 20: Tens of thousands of Moroccans join protest marches, with some 4,000 in the main city of Casablanca and between 3,000 and 4,000 in the capital Rabat. Riots break out in some cities and six people die when a bank burns down during protests in the northern town of Al Hoceima.

– March 9: With protests continuing, King Mohammed VI goes on television to announce “comprehensive constitutional reform” which would reduce his own sweeping powers and provide “expanded individual and collective liberties and the reinforcement of human rights”.

– April 28: A massive bomb blasts kills 17 people in a cafe frequented by foreign tourists in the resort city of Marrakesh. The authorities arrest seven suspects and blame the attack on the north African branch of Al-Qaeda, which denies responsibility.

– May 30: The European Union’s executive commission urges the Moroccan authorities to refrain from using force against protesters.

– June 2: A young protester dies in hospital four days after being injured during clashes with police in the town of Saif.

– June 9: A commission set up to study changes to the constitution says it will recommend a major shift of powers from the king to the prime minister, an independent judiciary and the declaration of Berber as an official language alongside Arabic.

– June 17: In an address to the nation, Mohammed outlines curbs to his political powers and pledges to build a constitutional monarchy with a democratic parliament. The proposals will be put to a referendum on July 1, the king says. They devolve many of the king’s powers to the prime minister and parliament.