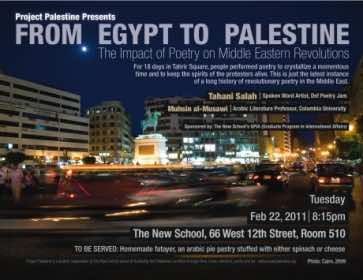 The first decision of the new Egyptian foreign minister Mohamed Al-Orabi is to establish a new department  in the foreign affairs ministry called  the “Palestine Department”.

During the “ Mubarak “ era , the General Intelligence Service (GIS) was in control of  the Israel-Palestine portfolio.

The GIS, which was headed by Omar Suleiman for almost 20 years, was given responsibility for several important portfolios previously handled by the Ministry of Foreign Affairs. Among the most prominent were the Palestinian portfolio, Egypt’s relations with the Nile Basin States, and Egyptian-Israeli relations.

Last week , a private – owned  Egyptian newspaper “Al Masry Al Youm”, declared that it has possessed number of documents which indicate that the former chief of Intelligence Service Omar Suleiman, the former Prime minister Atef Ebeid – who was transferred to the general prosecution for investigation yesterday – and the former Minister of petroleum, were responsible for the shameful exporting gas deal to Israel .

The establishment of the Palestine Department comes one day after Orabi’s appointment to office as the new foreign minister.

Orabi also outlined his vision of a new approach to the stalled peace process.

“We are experiencing a new strategy that requires the formulation of a unified Arab stance on the Palestinian cause,” he said.