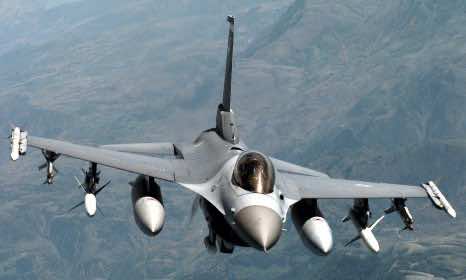 They are the first from their country to accomplish consecutive courses in basic qualification, flight lead upgrade and instructor pilot certification in the multirole fighter.

A handful of Air National Guard pilots will accompany them as they deliver the first four of Morocco’s 24-aircraft purchase. The new planes, block-52 versions of the fighter, will be fresh off the assembly line and are a considerable step up in technology from the third generation fighters Morocco currently flies.

Deputy Inspector of the Royal Moroccan Air Force, Brig. Gen. Abdelali Houari said: “We are modernising our fleet and we’ve chosen the F-16, not only because it is a high-quality airplane but also because of the close relationship we have with the United States.”

“We are really happy to send our pilots here to be trained. After a year and a half in the United States, our pilots are happy. Of course they want to return home but they have gained a lot of experience here with the Arizona Air National Guard.”

Lt. Col. Steve Haase, the Morocco programme manager for the 162nd FW, has worked with the Royal Moroccon Air Force for three years. He has trained fighter pilots from all over the world and fully understands the scope of the students’ historic accomplishment. He said:  “It’s all them. It’s a big commitment to be the first F-16 pilots for Morocco. It’s a testament to their positive attitude and work ethic. They are excited about the F-16 and its capabilities; yet they understand how much work there will be to build up an F-16 base.”

As students, the pilots averaged three sorties per week and accumulated more than 150 F-16 hours each. Once home, they will be responsible not only for training others but will also be instrumental in implementing F-16 operations at Ben Guerir Air Base.

Ben Guerir is a former US air base located about 36 miles north of Marrakech and once served as a transatlantic abort landing site for the space shuttle. It’s currently undergoing upgrades that – according to Moroccan officials – are modelled after US Air Force bases.

Colonel Haase said: “These are the best F-5 instructor pilots from their air force. They think the way we think. They have really shown that they want to learn how we (the US) operate with the F-16 so they can do it the same way – not just flying but everything from maintenance to logistics.”

Six additional Moroccan pilots are in the basic F-16 course in Tucson with graduation planned for September. They too will return home to help manage Morocco’s growing F-16 fleet.

It is unclear if more student pilots from Morocco will train in Tucson, although according to Colonel Haase, the 162nd FW stands ready. “Every country is very different; that’s what’s so fascinating for instructor pilots here.

“We get to know these guys on a personal level and establish trust with them. Training capable fighter pilots and fostering relationships along the way is what this is all about.”

Since 1989, the 162nd FW has trained with virtually every nation that flies the F-16. In addition to Morocco, the wing trains with pilots from Singapore, Norway, Belgium, Chile, the South Korea and the Netherlands.