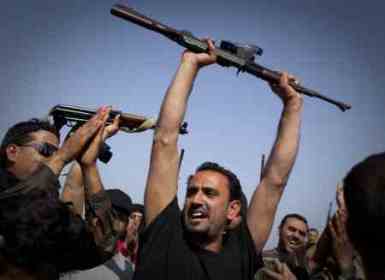 The French military confirmed Wednesday that it had air dropped “light weapons” earlier this month to Libyan rebels fighting Moamer Kadhafi’s forces in the highlands south of Tripoli.

Earlier, the Le Figaro newspaper and a well-placed non-government source had said that France had dropped several tonnes of arms including Milan anti-tank rockets and light armoured vehicles to the revolt.

But Colonel Thierry Burkhard, spokesman for the French general staff, told AFP that the shipments were essentially light arms such as assault rifles to help civilian communities protect themselves from regime troops.

Burkhard said France had become aware in early June that rebel-held Berber villages in the Djebel Nafusa highland region south of the capital had come under pressure from the Libyan strongman’s loyalist forces.

“We began by dropping humanitarian aid: food, water and medical supplies,” he said. “During the operation, the situation for the civilians on the ground worsened. We dropped arms and means of self-defence, mainly ammunition.”

Burkhard described the arms as “light infantry weapons of the rifle type” and said the drops were carried out over several days “so that civilians would not be massacred”.

According to Le Figaro, which said it had seen a secret intelligence memo and talked to well-placed officials, the drops were designed to help rebel fighters encircle Tripoli and encourage a popular revolt in the city itself.

“If the rebels can get to the outskirts of Tripoli, the capital will take the chance to rise against Kadhafi,” said an official quoted in the report.

“The regime’s mercenaries are no longer getting paid and are scarcely getting fed. There’s a severe fuel shortage, the population has had enough.”

A well placed non-government source told AFP that 40 tonnes of weapons including “light armoured cars” had been delivered to rebels in western Libya.

According to Le Figaro the French arms shipments are dropped from planes across the Djebel Nafusa region, where Berber tribes have risen to join the revolt against Kadhafi’s rule and seized several provincial towns.

The crates hold assault rifles, machine guns and rocket-propelled grenades, it said, and also European-made Milan anti-tank missiles, a powerful addition to the rebel arsenal that can destroy a tank or a bunker.

France has taken a leading role in organising international support for the uprising against Kadhafi’s four-decade old rule, and French and British jets are spearheading a NATO-led air campaign targeting his forces.

Rebel forces are based in Benghazi in the east of the country, and hold a besieged enclave supplied by sea in the western coastal town of Misrata, but have been unable to mount a convincing advance on the capital.