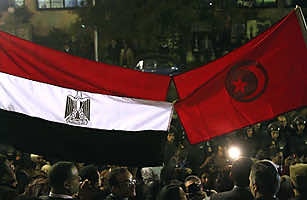 June 30, 2011- Mokhtar Trifi, president of the Tunisian League for the Defense of Human Rights, was extremely cheerful when we met for lunch recently. In a deliciously cool restaurant on a very hot day, he regaled me with stories of what happened after our last lunch, in February 2007. Following that meeting, I had written a column in which I quoted him asking me, in effect, why Americans did not promote democracy in Tunisia.

“You have no idea what trouble that caused me,” he said, laughing. After the column was published, Trifi was denounced in Tunisia’s undemocratic parliament, on the grounds that he was “advocating an American invasion of Tunisia in the American press.” Horrified, I told him that I hadn’t written that at all. He waved away my apologies: “Never mind, they accused me of far worse things. And now it doesn’t matter. Write about me anything you want!”

Trifi’s good humor is a sign of the times in North Africa: In Tunis, as in Cairo, you really can write anything you want. You can also say anything you want and talk to anyone you want. Strangers encounter one another at public meetings and discover they have much in common. Both Tunisia and Egypt now boast several dozen political parties. They hold meetings, form coalitions and break up on an almost daily basis.

This is a profound change. It is also the only change. Here is the strange thing about post-revolutionary Tunisia: Almost everything is still the same. The caretaker government, charged with running the country until elections can be held, contains elder statesmen who have been around for decades. The police are less omnipresent, but they are still there. Although former president Zine el-Abidine Ben Ali is holed up in Saudi Arabia — he and his wife were convicted in absentia of embezzlement last week — most of his bureaucrats and apparatchiks still have their jobs. The economy is untouched.

Egypt is no different. In Cairo, for the first time in decades, people can talk, argue and disagree vehemently. But the military government still runs the country. Many of the same people still run the same ministries as they did under the old regime. One of the top researchers at the think tank Freedom House told me that by their reckoning, most Egyptian institutions were no more democratic or open now than they were six months ago. At another lunch, I asked four Egyptian women if they thought the behavior of the security police had changed for the better. One said yes. One said no. The other two shrugged: It was hard to say.

Like Trifi, my Egyptian lunch companions were also cheerful, even euphoric, about what had been achieved. But for how long will people consider free speech and free association “enough”? At what point will they want more? There is an argument for taking things slowly: The Egyptian and Tunisian political classes were as surprised by their revolutions as anyone else. Many discussions — about the constitution, the legal system, the economy — have yet to be held, and they will take time. There are no electoral laws, no electoral rolls. As yet there is no legitimate government in either country and thus no clear mandate for reform.

But the longer it takes for real change — new leaders, a new economic order — to occur, the greater the chance of disappointment, discontent and even counterrevolution: Nobody ever joins a street uprising to resume business as usual. On Tuesday night, some 2,000 people were already back in Tahrir Square in Cairo, battling with the police, calling for more radical change.

There are things that the caretaker regimes could do. This could be the moment to end the damaging and wasteful subsidy system in Egypt, for example, and to replace it with support for poor families, as Brazil has done. This is also a good time to begin more systematic debate about corruption and the past. The media and the rumor mill circulate gossip about Ben Ali and his family in Tunisia, but as time passes, it will be harder to deliver justice for those badly treated by the previous regime.

For all of those reasons, Egypt and Tunisia should try to hold elections as quickly as possible, although many of the democratic forces in both countries would like to delay. They want the nascent parties to have more time to establish themselves, they want the electoral laws to be carefully written, they want everyone to have more time to argue. But an imperfect legislature is better than none: Poland’s first post-Communist parliament in 1989 was only partially freely elected, and it even contained members of the old regime. The government it produced was also a compromise, and it too contained members of the old regime. Nevertheless, it looked, acted and felt radically different, and quickly earned its legitimacy. Talk, debate, argument, conversation: Now that they have those things, Egyptians and Tunisians won’t easily give them away. But they must lead somewhere, soon, or many will begin to question where they are leading.