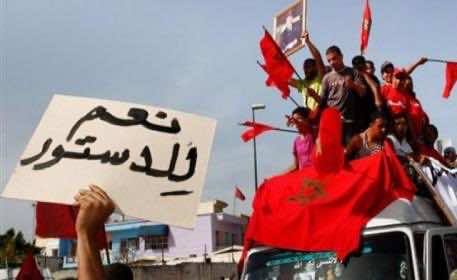 Expatriate Moroccans are being offered the chance to take part in the country’s constitutional referendum this weekend.

They have been invited not only to cast votes at the Moroccan embassy, but also to count them in a process that will last from Friday until Sunday evening.

Mohamed Boudrif, the deputy head of mission at the Moroccan Embassy in Abu Dhabi, said allowing the public to count the votes was both a matter of transparency and a way of guaranteeing people a freedom of choice.

“Most of them – the citizens – are going to participate in counting the votes,” said Mr Boudrif. “This is very, very important, and it’s the same thing for counting the vote, for the whole process, to guarantee to Moroccans to make their choice freely,” he said.

The process will be supervised by an appointed bureau.

The referendum will decide whether or not King Mohammed VI’s proposed new constitution will be adopted.

If passed, the constitution – which the King unveiled earlier this month during a televised broadcast – would result in the monarch being stripped of some of his power in a bid to introduce democracy to the North African country, which weathered this year’s Arab uprisings.

Pro-democracy protesters have questioned how the proposed constitution would affect the country; for others, there are no misgivings.

“Yes, I am voting,” said Emtessar, a 25-year-old from Mohammédia, who spoke through a translator.

The housewife, who did not wish to give her surname, said that only a “few” people in Morocco understood the changes the reform would bring to the country, but she believed most people would vote anyway. Emtessar, who has lived in Abu Dhabi for six years, suspected that almost “90 per cent” of those who voted would do so in favour of the constitution.

She said she would vote for the constitution.

“It may even help fight crime.”

Others are less confident. “Yes, I’ll be voting, and yes, it will be OK for the people, but I don’t think there will be a big difference if the constitution is passed,” said Reda Noussir, from Casablanca, who has lived in Abu Dhabi for 12 years. Mr Noussir, who works in investment, said that whatever the outcome, it was important for Moroccans to take part in the historic vote.

“It is important, for the people, to know what everyone is thinking,” he said.

Mr Boudrif said there would be no interference in how people voted.

“We have very clear instructions, from Morocco, not to interfere, or to influence people about their choice,” he said.

“They should choose as they like, freely. Our job is to explain the content of the constitution as much as possible.”

Chadia Ratibi, 24, a waitress at Marmar, a local Moroccan restaurant, said she could not get fully excited about the vote, because she was so far away from her home.

“I am only 50 per cent happy,” she said through a translator, “but for my friends and family, it is all they talk about. When I call them, all I hear is them talking about it.” Ms Ratibi will vote on her day off this coming weekend.

The people of Morocco, said Mr Boudrif, would vote out of their “respect” for the king, who has held power since his father, King Hassan II, died almost 12 years ago.

“Moroccans believe him, and have confidence in him.”

For some expatriates, such as 29-year-old Aziz El Gouzouli, from Agadir, confidence was to be found in fellow Moroccans.

“In my eye, the 2011-referendum will foster an unprecedented constitutional achievement for Moroccans. After nine weeks of peaceful marches swarming the country from top to toe calling for a new Morocco … the government has reasonably paid a sharp-eared response to pro-reform demonstrators’ social and economic demands. This obviously indicates to what extent Morocco would not be another Tunisia, Egypt or Libya.”