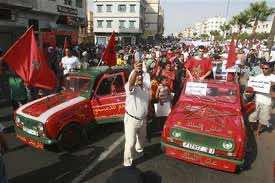 For the region, where street battles of the Arab Spring are deciding the fate of smug palaces and invincible kings, the change in Morocco comes right from the top — conceived, overseen and adopted by the King.

When Moroccans cast their ballots on Friday for the referendum on constitutional changes, the occasion would be marked by a sense of fatality over the results – a resounding yes. But for the vast, rugged North African region and Arab countries extending to Asia, and for a certain Hosni Mubarak and Muammar Gaddafi; Morocco’s King Mohammed VI would certainly be the object of envy. The lifetime presidents are either history or battling their past when the Moroccan sovereign is busy scripting the future.

Moving closer to Europe, which is located across-the-Mediterranean, the Friday’s vote would see Morocco take the first step towards striking a break — neither clean nor complete — from the past that has been the misfortune of the vast region.

The draft constitution, to be put to a ‘yes’ or ‘no’ vote, aims to establish a constitutional monarchy. It would enable the victorious political party to choose its prime minister, make him the head of government, who is accountable to parliament, give him executive powers of appointment to key civilian posts, and empower him to dissolve the House.

Strangely, Rabat, the Moroccan capital, remains indifferent to the watershed change, much to the disbelief of the world media, as people go about their daily chores like just another day in the run-up to the referendum.

Perhaps, it is the system that for years has discouraged politics like the Eastern Bloc or whose eagle-eyed interior ministry is still feared.

There are also expressions of dissent. A big rally of ‘chomeurs’ – or the unemployed – challenged the police in the central city on Wednesday evening. A young participant, hiding from the prying glances of intelligence cops, said the country should have held a dialogue with the jobless.

The February 20 movement — largely dismissed as a gathering of fringe disgruntled groups that didn’t have a leader or a vision — has called for a boycott. The establishment says it is to avoid the embarrassment of defeat and the taint of failing to influence opinion as the rest of the “mouvements de jeunesse” in the Arab.

Experts call the reforms a step forward but caution that Morocco’s transition to a true constitutional monarchy would largely depend on the ruling elite’s willingness to exercise change in both letter and spirit.

Some feel the King is only delegating powers to PM in certain key areas such as the head of council of ministers. The appointments to the military would still remain his exclusive constitutionally-ordained power.

The pro-state experts, however, feel that the situation has to evolve gradually, and cannot be abrupt without the system being ready for it. “And please don’t expect a copy of British monarchy. Our democracy would have to adapt to Moroccan specificities,” a senior official said.

The draft constitution — besides giving a special place to elections, PM and parliament — addresses the principal source of anger on the Arab street: the immunity to corrupt ministers. It has done away with the Court of Justice for cabinet members to make them liable to justice for crime and corruption like any ordinary citizen.

As for the King, the symbolism of modernity lies in his shedding the references to sacredness, but would be inviolable.

The vote would mark the first step in how strong Morocco’s journey would be towards a modern, constitutional nation. And, the optimism starts from the top. The King in his June 17 speech, announcing the referendum, said, “The constitution…. will also enhance Morocco’s regional leadership as a State with a truly distinctive, unity-based democratic approach.”