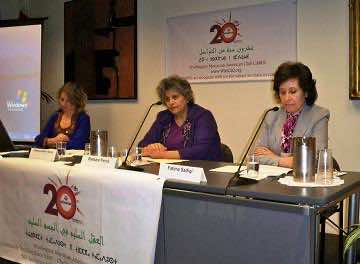 With the growing dominance of the Internet, blog, chat and mobile telephony, the great “big bang” of the new media has begun. Consequently, communication is rapidly changing and becoming mobile, interactive, personalized and multi-channel. This extraordinary  revolution is affecting the basic structure of Mediterranean societies, especially those in the south, and is raising discussions and debates that are profoundly related to women: the rapid transformation of the boundaries between the public and the private spaces, the relationship between the new media and women’s activism, the relationship between new technology and women’s oral literature, changes in the relationship between written and oral languages, the (problematic) increase in the use of mother tongues (mainly oral) in the field of education, and the challenges of new transmissions of women’s versatile knowledge.

Against this backdrop, the ISIS Center for Women and Development (I.C.W.A.D.) is organizing an international forum on “Women and New Media in the Mediterranean Region”, which will be held during the period June 24- 26, 2011 at the Palais des Congrès in Fez. The forum has five main axes:

1. The new media and the deep transformations of the gender/space relationships

2. The new media and women’s activism

4. The new media, gender and language use in education

5. The challenge of new transmissions of women’s knowledge

The event brings together activists and researchers from the Mediterranean region, North America and Asia. It is an extension of workshops and other conferences and discussions that Isis Center organized in 2008, 2009 and 2010.  The recommendations of these events pointed to the importance of addressing women and the new social media in the Mediterranean region and a the international level. The outcomes of the upcoming conference will not only just paper-based. In addition to publishing a volume on the theme of the conference, the organizing committee plan to link their activities with the Journal of New Media Studies, supervise MA and PhD theses on the theme and train a number of local women in new media knowledge.

The ISIS Center for Women and Development (I.C.W.A.D.) was created on July 4th, 2006 in Fes, Morocco, by a group of Moroccan academics and researchers. The Center is characterized by interdisciplinarity and the use of multiple languages, namely, Arabic, Amazigh (Berber), French and English.