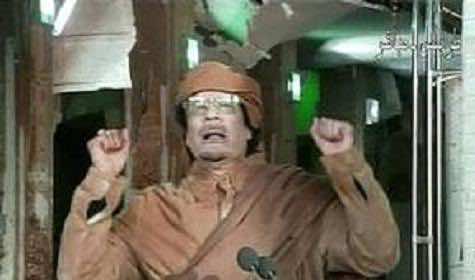 A United Nations panel said Wednesday that Libyan government forces have committed crimes against humanity and war crimes in a conflict it estimates has killed between 10,000-15,000 people.

The U.N. investigators said there is evidence that opposition forces also committed “some acts which would constitute war crimes.”

The commission is not of the view that the violations committed by the opposition armed forces were part of any ‘widespread or systematic attack’ against a civilian population such as to amount to crimes against humanity”.

The panel based its finds on interviews with 350 people in government and rebel-held parts of Libya, as well as in refugee camps in neighboring countries.

Their report adds to evidence collected by prosecutors at the International Criminal Court, who are seeking arrest warrants for Moammar Gadhafi and two other senior officials it alleges are responsible. The report was commissioned in February by the U.N. Human Rights Council, which has no power to launch legal proceedings but can censure governments accused of committing abuses.

The U.N. panel said government forces committed murder, torture and sexual abuses “as part of a widespread or systematic attack against a civilian population” before and during the conflict.

“Such acts fall within the meaning of ‘crimes against humanity,'” it said.

“The consistent pattern of violations identified creates an inference that they were carried out as a result of policy decisions by Col. Gadhafi and members of his inner circle,” the panel said in its report.

The panel’s report also found that rebel forces committed “some acts which would constitute war crimes.”

The panel said estimates of the number of people killed in the conflict since February range from 10,000-15,000, citing government officials, the opposition and non-governmental organizations.