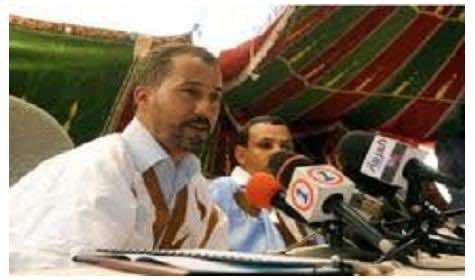 The Sahrawi militant Mustapha Salma Ould Sidi Mouloud launched, on Wednesday, an open sit-in in front of the HCR office in Nouakchott to demand a quick solution to his “tragic” situation.

In a statement issued after a two-hour meeting with the HCR officials, Mustapha Salma said he refuses that his case  remain “outstanding”, announcing that he will start, in a first stage, an open sit-in in front of the HCR office.

He explained that over six months he used all legal means with the Commission’s office in Geneva, but he received no answer in respect of his legal situation.

He recalled that his hardship was due to his open declaration of support for dialogue in the camps of Tindouf towards a realistic, democratic solution to the Sahara conflict.

In April 2010, Mustapha Salma visited the southern city of Smara for the first time in 30 years, and declared that the autonomy initiative is “the ideal solution” to the conflict.
On his way to the Tindouf camps, on September 21, he was kidnapped by the polisario militia and imprisoned in the desert for 71 days. He now seeks to return to the camps to join his family but is being denied access.