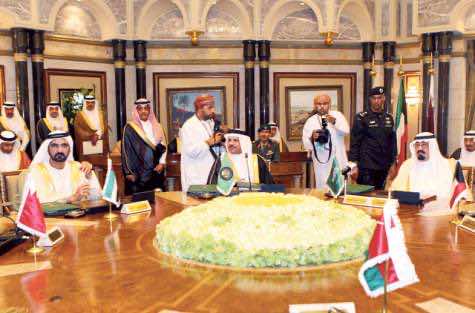 New York- The proposal to enlarge the Gulf Cooperation Council to Jordan and Morocco, made at a council summit meeting in Riyadh last month, marks a profound change in the nature of the organization as it reaches its 30th anniversary. This decision, which went practically unnoticed in the West, is all the more worthy of attention in that it is likely to usher in long-term changes in the region’s political scenario.

Initially set up to provide a safeguard against an Iranian military threat and to create regional economic integration in the Arabian Peninsula, the Gulf Cooperation Council has moved away from its early agenda and now operates as a club for the Arab monarchies.

The council’s aim is simple: to defend by all means possible the region’s eight monarchic regimes. It fears that the fall of even a single monarchy could have irreversible consequences for all the rest, undermining the legitimacy of the reigning families and opening the gates to all those in the Arab world who are looking for more liberty, justice and equality. This is why the Gulf monarchies have intervened to quash the popular uprising in Bahrain.

Today, it is Jordan and Morocco that are seen as the weak links in this chain of interests. Both monarchies are highly in debt and face considerable social unrest. This is why the countries of the G.C.C. — Kuwait, the United Arab Emirates, Saudi Arabia, Bahrain, Oman and Qatar — have extended a hand to Kings Abdullah II and Mohammed VI.

The council’s initiative is a clear sign of the panic sweeping the royal courts in the Gulf, particularly in Riyadh. The Saudi royal family has had to come to terms with the power of the Arab Spring, which has exceeded all expectations. The rise in popular discontent could reach dangerous levels in the Arabian Peninsula if the Yemenites manage to oust President Ali Abdullah Saleh. The Saudi government is trying at all costs to prevent his fall — and also pledging its support to Syria’s president, Bashar al-Assad.

Another important consideration is the fact that the containment of Iran no longer seems to be a priority for the international community. The fall of Hosni Mubarak brought the curtain down on the alliance between Saudi Arabia and Egypt. The Egyptian generals now seem to be turning more toward Ankara and Tehran, snubbing Riyadh.

Moreover, the Obama administration is no longer perceived as giving its unconditional support to the Saudi regime. The way Washington left the autocratic regimes of Tunisia and Egypt to their fate frightens the princes of the Gulf States, who know that they do not enjoy great popular support among the Arab peoples. Though the Gulf monarchies account for only a tenth of the total Arab population, they hold half its wealth. By bringing Jordan and Morocco into the fold, members of the Gulf Cooperation Council hope to reinforce their strength both demographically (22 percent of the Arab population) and economically (58 percent of Arab G.D.P.).

Another advantage for Saudi Arabia is that it can count on the complete support of Jordan and Morocco within the council and thereby increase its political clout at the expense of its rival Qatar.

What are the potential advantages for Jordan and Morocco? Both monarchies stand to gain massive financial assistance and precious political support. In exchange, they will declare allegiance to the Gulf monarchies and undertake to uphold them in all circumstances, even to the point of having to send armed forces to maintain order and security in the Gulf. It is thus not inconceivable that Jordanian troops might intervene in Saudi Arabia to quell a popular uprising there. Finally, the kings of Jordan and of Morocco are likely to find that they have to limit the scope of the democratic reforms they are preparing to implement, so as not to offer the peoples of the Gulf states a worrying precedent.

All told, this enlargement — which also serves the interests of the Israeli government in that it reinforces the Jordanian monarchy and increases the isolation of the Palestinians — accentuates regional antagonisms. It marginalizes Yemen, isolates Iraq, and aggravates the frustration of Palestinians and other Arabs.

The initiative taken by the Gulf Cooperation Council is not necessarily consistent with the course that history is taking. Given that President Obama has spoken out firmly in support of the Middle East peace process and the move toward democratization in the Arab world, the council’s efforts could be the precursor to a political crisis between the United States and Saudi Arabia. If so, that would indeed prove to be a major revolution.