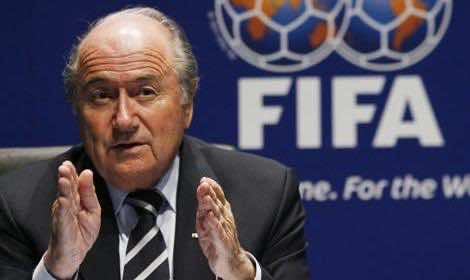 Despite damning corruption allegations, Sepp Blatter has been re-elected as president of soccer’s world governing body. The European press says this is evidence of a broken institution.

The body’s ethics panel cleared Blatter of corruption allegations on Sunday, but his reputation remains tarnished. He was re-elected – unopposed, after his only opponent was suspended over allegations that he was offered bribes – with 90 percent of the vote.

The Danish daily Jyllands-Posten says Blatter’s defiant assertion that there was “no crisis” in soccer is reminiscent of the Iraqi information minister’s transparent claim that American troops were “not in Baghdad” during the 2003 invasion.

“FIFA has been in crisis for a long time, and it will stay that way,” it writes.

The Dusseldorf-based Westdeutsche Zeitung agrees that Blatter’s denial of a crisis is absurd.

“No other has mastered the art of intrigue in the international sporting world as well as the man from Valais,” it says. “His self-importance occasionally takes on whimsical characteristics.”

The paper says FIFA’s decision to hand over the selection of World Cup host countries to the 208-member assembly is not “revolutionary,” as some have dubbed it. Rather it is a “clever concession” to constituents by a man who “cannot be saved.”

“This far-fetched story line would be worthy of vaudeville, if it weren’t for the fact that it speaks of the most powerful organization that controls the destiny of football in the world,” it writes.

Blatter’s promises of reform, like bringing in more transparency to FIFA, are “nothing new,” it writes. “Paradoxical, that the person under whom so many corruption scandals have been produced has proclaimed himself the defender of the democratization of the body.”

The conservative Czech newspaper Lidove Noviny calls Blatter “deputy Christ on earth,” and says the history of electing FIFA presidents “reminds one of the Middle Ages.”

“In all of its 107 years, only eight men have risen to the top of the organization,” it writes. “That’s one less than the number of popes in the same time period… This is no longer a papal reach of power, it’s a Bolshevik-style state of equality with God.”

In England, where soccer authorities had called for the election to be postponed so that “any alternative reforming candidate” could oppose Blatter, the press withheld no criticism.

The Independent writes that with no new leader at the helm, “the reputation of FIFA will continue to sink.” The organization was “playing with fire” if it continues to ignore the “collapse in trust.”

In a stern warning, it says: “It is not impossible that national football governing bodies will break away and stage their own tournament.”