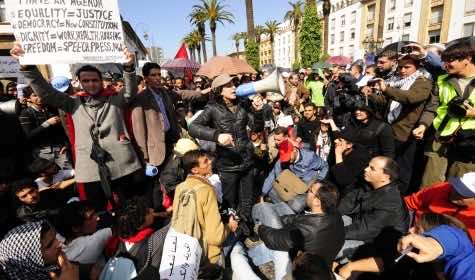 A Moroccan man wounded by security forces at a pro-democracy demonstration died of his injuries on Thursday, Moroccan opposition groups said. The government said the man’s death was unrelated to the street protest.

An interior ministry source told Reuters the authorities categorically denied the man’s death was related to the protest, one of several demonstrations that took place in Moroccan towns that day.

The source said the death certificate showed that Amari had died of cardiac arrest and respiratory failure. The attorney-general had ordered an inquiry and an autopsy would now be carried out, he said.

To date dozens of injuries but no deaths have been reported as a result of street demonstrations that have taken place at weekly intervals in the north African kingdom in recent months, inspired by uprisings elsewhere in the Arab world.

The protests in recent weeks have seen a tougher response from security forces in contrast to an earlier hands off approach to the demonstrations for major constititional change.

The political landscape in the kingdom is dominated by a powerful dynasty that has ruled for 350 years.

In the latest round of protests on May 29, security forces used batons against demonstrators in several places.

Commenting on a demonstration in Casablanca, the government said it had been banned and that police had acted in response to what it described as provocative behaviour by the protesters.