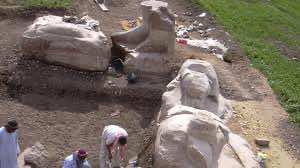 The face of a colossal alabaster statue of Amenhotep III recently found near the third pylon of his funerary temple at Kom el-Hettan, Zahi Hawass, antiquities Minister, said in a statement Tuesday.

During their excavation at the funerary temple of the 18th Dynasty king, Amenhotep III (c. 1390-1352 BC), at Kom el-Hettan on the west bank of Luxor, the mission of the Colossi of Memnon and Amenhotep III Temple Conservation Project unearthed an alabaster colossus of the great king. The team has also discovered the head of a deity, as well as restoring a stele and a head of the same king.

Hawass has described the face of Amenhotep III on this colossus as a masterpiece of royal portraiture. It has almond shaped eyes outlined with cosmetic bands, a short nose and a large mouth with wide lips, delimited with a sharp ridge. It is very well preserved and measures 1.20 m in height. In spite of its large scale, the face is extremely well carved and well proportioned.

Dr. Hourig Sourouzian, the head of the mission, has also described the discovery as very important for the history of Egyptian art and sculpture, as well as for the story of the temple.

The statue is the northern one of a pair of colossi that were once placed at the gate of the third pylon,” reported Hawass.