Morocco World News
Home News Maghreb Beyond the Burqa: Accepting the Other in Europe 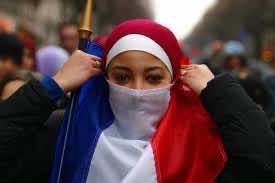 The French government can finally relax. It has just achieved its biggest legal feat against the enslavement of Muslim women in Europe. The legislative and social mobilization in the country against the burqa – which is controversially dubbed Islamic veil despite the fact that Muslim jurists have deep disagreements about it – has finally borne fruit. Henceforth the purity of the French national identity will not be besmirched by the ubiquitous presence of women in uncanny foreign dress in the burgeoning streets of Paris and major French cities. The French politicians lived up to the expectations of their enlightened constituency and proposed a bill to protect Muslim women in their country from the abuse of their bearded fanatic husbands. A historical achievement for women’s rights in the country of Lights and in the multicultural tolerant democratic Europe, indeed.

As of April 2011, the face veils are banned in the French territory. Anyone who contravenes will attract a monetary fine of $208, a compulsion to take “citizenship classes” or in severe cases be summoned to the police station for identity checks. This ban prohibits wearing any item of clothing covering the face in public areas, such as universities, schools, public administrations, public transportation, street, hospitals, official buildings and parks. The stated intention is to ban the burqa and protect women from the “oppression of their male relatives” and the weight of traditions. However it may inadvertently also be banning a lot of women – who wear nikab with utter conviction, right or wrong, as part and parcel of their religion – from public life, which in itself can become a form of institutionalized enslavement.

It is true that the burqa represents a visual provocation for societies that have paid a heavy toll to free their minds and bodies – by extension – from the abusive authority of religion in dark ages. We also understand that, for many people and women especially, its mere presence evokes oppression and powerlessness. It is also true that it is foreign to the culture and the dominant values of Western societies. But, again, the choice to be veiled or unveiled should remain a matter of personal freedom within the precincts of a democratic pluralistic state. Interestingly, the presence of 2000 totally covered women – most of whom are white French women – threatens the national identity and republican values of a whole nation, and the only way to “preserve” these values is banning them from the public arena. Thus, these women are doomed to suffer from a double invisibility. First, as veiled women whom everybody believes are forced to be veiled; second as invisible citizens banned by law from the public space in a stark contradiction with the spirit of the law passed supposedly to liberate them.

The French burqa-law is the institutional consecration of a general tendency to outlaw face veils in Europe that started in Belgium a year ago and has gained momentum ever since. Holland, Spain, Switzerland and other European countries are all in the process of passing bills that intend to “liberate Muslim women” from these enslaving practices. As sovereign states, they have the total power to legislate and impose their legislations on anyone present on their soil. However, Burqa-laws are just another facet of the European countries’ failure to assimilate, integrate and include the bulk of their citizens from foreign origins – or their citizens who embrace a different faith – in the mainstream culture.

It is again one of these moments when the discourse of human rights, democracy and respect of human dignity is exploited to advance a nationalistic discourse under the banner of national identity. A national identity that needs itself to be redefined and expanded – even by resorting to plastic surgery – in order to afford a spot for everyone under its umbrella. Instead of addressing the core issues posed by this minority of European citizens – whom Bruno Etienne would have divided into three categories: Muslims in Europe, European Muslims and Muslims of Europe – who were born, raised and educated in their secular schools; European countries are opting for a legal approach which will definitely cure the symptoms but will never uproot the illness. It is high time European countries asked themselves the unavoidable – but long overlooked – questions of multiculturalism, pluri-identities and the full acceptance of their citizens whose religious and cultural practices do not necessarily fall within the existing national identity molds.

The burqa battle is the tree that hides a thick forest called the plight of Muslim and other immigrant minorities in Europe in general. Abdelmalek Sayad coined the notion of “double absence” which wittily represents the fate of immigrants – and their children – caught between two worlds. A world of origin to which they do not really belong except for their swarthy looks, linguistic code switching, names and religious traditions partially; and a world, in which they were born, raised, educated and work as any responsible citizen. This “double absence” of the descendants of immigrants in Europe in general is a thorny question challenges the long standing definitions of identity, nationalism and citizenship in Europe.

Redefining Europeanness and the religion or religions of Europe in a globalized world seem to us to be the urgent questions that need serious consideration from the EU countries. European countries, more than ever before, need to engage in proactive policies to recognize these Others as full citizens regardless of their countries or cultures of origin. This proactive policy entails the reassessment of their status in the European countries, reconsidering their marginal status, resolving the issues related to their lack of opportunities for social and economic advancement; in addition to putting an end to their exclusion from the mainstream culture.

A collective action from the EU institutions and member states to redefine Europeanness, assimilate these new Europeans and embrace their difference as a source of enrichment, not a danger, is an urgent need for the future of a multicultural Europe. Only when EU countries realize that the burqa can be more of a form of protest than a religious symbol, only then will they make the first step towards understanding that something is not functioning well in their policies towards their citizens from foreign origins. When that happens, Europe will not need burqa laws nor arrest people in the streets because of their choice to wear what they think is prescribed by their faith.

The real veil that European countries need to unveil is the veil of a culturally and religiously homogeneous “continent” that continues to exist in the minds and hearts of many politicians. The protest identity generated by citizens from immigrant descent from their position of the devalued by the logic of the dominating identity is an expression of frustration against the legitimizing identity  of the dominant institutions in European societies (Castells, Power and Identity, pp.8-9) . A common project identity is necessary to transform the European social structure to allow everyone to belong in a genuinely multicultural continent.