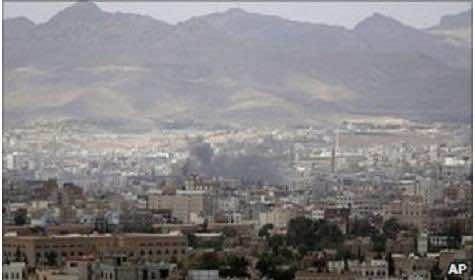 There are reports that President Ali Abdullah Saleh has been slightly injured in an attack on his compound in the Yemeni capital, Sanaa, as pitched battles continue between government forces and armed tribesmen.

However, officials said he was well and would address the nation shortly.

The PM and parliament speaker were also reported hurt and four guards killed.

Earlier troops shelled the home of the brother of the tribal leader whose supporters they are fighting.

Thousands meanwhile attended a funeral for 50 people killed in the violence.

The United States has sent an envoy to the Gulf to discuss ways of stopping the violence, which has brought Yemen to the brink of civil war.

More than 350 people have been killed since the uprising started in January, but least 135 of them have died in the past 10 days.

Western and regional powers have been urging Mr Saleh to sign a Gulf Co-operation Council-brokered deal that would see him hand over to his deputy in return for an amnesty from prosecution.

He has agreed to sign on several occasions, but then backed out.

GCC Secretary-General Abdulattif al-Zayani called for an end to the fighting and said the council was ready to do all it could to help, Reuters news agency reported.