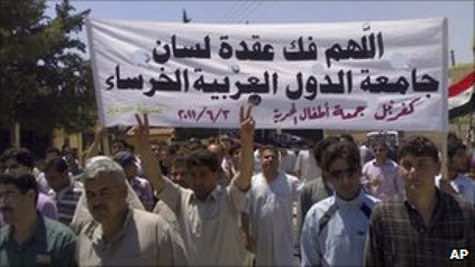 Thousands of anti-government protesters have taken to the streets across Syria after Friday prayers, in defiance of the ongoing crackdown on dissent.

At least 34 people were killed when security forces opened fire on a crowd of about 50,000 people in the central city of Hama, activists said.

The opposition has dedicated the day to the memory of more than 30 children said to have died in the uprising.

The army is meanwhile continuing its assault on the central town of Rastan.

Scores have been killed in the past few days as troops and tanks attempted to quell protests there. At least two civilians died on Friday, the Local Co-ordination Committees said.

She said the US had done all it could to exert pressure on Syria, but she lamented the lack of a strong, united international response.

On Wednesday, Mr Assad launched a “national dialogue” and freed hundreds of political prisoners as part of a general amnesty.

Human rights groups say more than 1,100 people have been killed since pro-democracy demonstrations began in mid-March.

‘No dialogue with killers’

Organisers of the protests have tried to give each week of the uprising a special theme, and this latest day was dubbed the “Friday of the Children of Freedom”, reports the BBC’s Jim Muir in Beirut.

It comes at the end of a week when the UN Children’s Fund (Unicef) highlighted the death of at least 30 young people so far.

The week has also seen a 13-year-old boy from the south, Hamza al-Khatib, emerge as the unofficial icon of the Syrian revolution. Activists said he had been tortured to death by security forces – something the authorities have denied.

Following Friday prayers in Hama, an estimated 50,000 people took to the streets in what opposition activists said was one of the largest demonstrations in Syria since the uprising began.

Later, security forces opened fire on the protesters in the old quarter and the nearby Assi square, activists said, killing at least 27. Many others were taken to the city’s main hospital, they added.

“There are many killed and wounded people, the hospital is full,” one witness told the Reuters news agency. “I fled the area but I can still hear sporadic gunfire.”

Security force personnel were supposed to have had strict orders not to open fire on unarmed protesters, our correspondent adds.

State television said three “saboteurs” were killed when police tried to stop them from setting a government building on fire in Hama. The government blames “armed terrorist gangs” for the violence.

Thousands of people also reportedly demonstrated on Friday in and around the capital, Damascus, where there unrest has been limited.

Some 2,000 people marched in the northern district of Rukn al-Din, while police used batons to beat demonstrators in the southern district of Midan, the Syrian League for Human Rights told AFP.

There were also rallies reported in the Damascus suburbs of Barzeh, Jadidat Artouz, Darayya and Zamalka.

Further demonstrations were said to have taken place in the city of Homs, the north-western town of Idlib, the eastern town of Deir al-Zour, and the western towns of Madaya and Zabadani.

In the southern city of Deraa, where protests first broke out, hundreds defied a military curfew and took to the streets chanting “No dialogue with killers”, activists said.

There were also reports that the internet service had been cut in several parts of the country, apparently to prevent activists from uploading footage of the protests and repression.

Reports from Syria are hard to verify independently, as foreign journalists are not being allowed into the country.