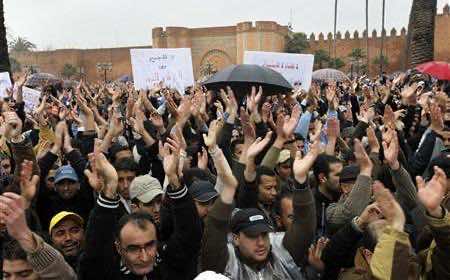 There is a consensus among Moroccans that the brutal clampdown of demonstrators was ordered by Moroccan Interior Minister Taieb Cherkaoui who in turn received his guidance from his King. Many believed that after Mohammed VI’s bulleted speech outlining his schedule for an attempted constitutional reform, the situation would show improvement. The wave of demonstrations rumbling through the main streets of many Moroccan cities today indicates that the woes of Moroccans are deep and intractable and the government and the political parties are dispassionate and guileful; now that the stone wall of fear has tumbled down, grievances that have long been stifled are bubbling at the surface. Resentment against a government no longer trusted, nor feared by the people, runs high.

Most see the King ‘speech and government officials’ promises for the soon-to-be-implemented reforms as nothing more than temporizing. At a time of economic austerity and political upheaval, Moroccans are galled by a butt-shaking Shakira who pockets a million dollars for a fifteen minutes appearance on Mawazin; it may not be true, but that is the word in the street – hada ‘ar, hada ‘ar, Shakira dat melyar (this is a shame, this is a shame, Shakira was paid a million) people chanted in shar’e eshjar (officially known as Driss Elharti street) in Casablanca. Moroccan are no longer duped by the government’s diversionary methods; in comparison to previous years, Mawazin 2011 was largely boycotted; Argana restaurant bombing in Marrakesh failed to rally the people behind the government; the Algeria vs. Morocco soccer game this coming weekend will not succeed in besotting the population.

The political parties failed to take the initiative; they are reeled by the sudden change and waited too long to align themselves with the popular reformist movement. It is clear that they have never had a vision. The appearance of their representatives before Abdellatif Menouni and the eighteen members the Consultative Commission for the Review of the Constitution to present their proposals was a contest in political impotency; their vision was unambitious and unimaginative. The little credibility they had shriveled like a penis in frigid water.

Against such mounting, sullen defiance, the Moroccan authorities responded in the feral fashion that has always been integral to the pathology of dictatorship. It unleashed its baton-wielding philistines to club the demonstrators into obsequiousness; it deployed its basij style security force to kick defenseless women and bash the heads of their teenage kids with the heels of their government issued boots. They cordon the peaceful crowd in a well practiced maneuver and run them through a gauntlet of raining sticks, fists, and kicks as if they were a herd of cows that had run amok. These so called security forces, shielded from accountability, are capable of the most criminal acts to terrorize the people; they are the ones that, much like it happened in Tunisia, Egypt, Syria, and Yemen, will shed their uniforms and mingle with the populace to snipe demonstrators, kidnap and rape women, and burglarize institutions if directed to do so by their commanders. They do not question orders and, much like the ruthless usurpers that command them, they dehumanize the population to better mortify it. You can hear it in the insults they indiscriminately bark out. It was reported that in a Ramadan day in 2008, before he shot and then kicked Tariq Mouhib, a uniformed police officer who pulled him over for a mundane traffic violation, Hassan Yacoubi, the husband of the aunt of king Mohammed VI, Lalla Aicha, had said to him:” you and your lot are nothing by flies. How dare you pull me over?” (Hassan Yacoubi was never presented to justice for his crime.) Indeed, that is how Morocco’s government intent on denying the Moroccan people a breakthrough to dignified living sees the country’s young reformists. These potentates orchestrating the defenestration of democracy are the ones we are awaiting on to implement reforms.

The more the government uses violence to suppress demonstrations, the more the people will take to the streets to voice their dissatisfaction. We are not far from the day when young demonstrators will stop running, and instead clench their fists on the throats of those uniformed brutes and their walkie-talkie totting commanders. The odds for a peaceful transition are slim. I fear the worst is yet to come.

*Ahmed T.B. is a moroccan American writer who has travelled and lived in the Middle East, Africa, Europe, and Asia. His articles have been published by numerous e-publications. He currently resides in Washington and writes about political issues relating to Morocco, North Africa and the Mediterranean region. He blogs at http://cabalamuse.wordpress.com