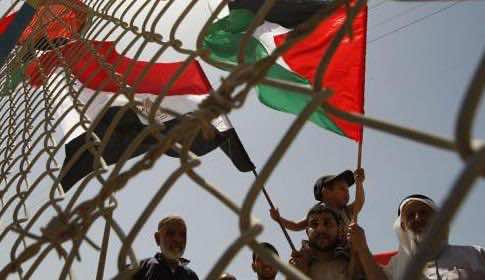 June 04, 2011 (Al Arabiya News) Dozens of Palestinian protesters in Gaza on Saturday stormed the iron gate of a border crossing with Egypt shut for the first time since it reopened late last month, Hamas border officials and witnesses said.

Palestinian border officials said three buses filled with 180 passengers had waited several hours to cross the border at Rafah, the Hamas Islamist-ruled territory’s gateway to Egypt, and some of those waiting responded by forcing the gate open.

“We have not been notified of any reason for the closure, passengers are angry,” one of the officials told Reuters.

Ayub Abu Shaa, head of the Hamas police unit at Rafah, said phone calls to the Egyptian side went unanswered and a crowd of hundreds of Palestinians seeking to cross to Egypt were faced with a locked gate.

According to a security source in Egypt, the crossing remained closed for works which were to have been completed on Friday and efforts were underway to allow through Palestinian buses.

Egypt reopened the Rafah crossing, the only way in and out of Gaza that is not controlled by Israel, last month after it had been largely shut since June 2006 when Israel imposed a blockade after militants snatched an Israeli soldier.

The Israeli blockade was tightened a year later when the Islamist movement Hamas seized control of the territory, with Egypt cooperating by tightly restricting movement through Rafah.

The sudden closure came a day after Lebanon barred its residents from approaching the border with Israel on Sunday, when the Palestinians mark 44 years since the seizure of the West Bank and Gaza Strip in the Six-Day War.

Palestinians in Lebanon and other Arab states neighboring Israel have said they plan to march on the Jewish state’s borders to mark the anniversary.