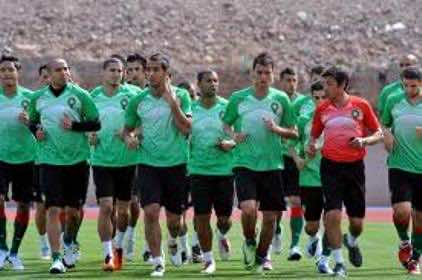 With only one day until the much-anticipated match between Morocco and Algeria on June 4th in Marrakech for the qualifiers of the CAN 2011, the news reports about the decision of the rising star Adil Taarabt to leave his teammates’ training camp came as a punch in the guts to Moroccan fans. This news was all the more shocking that over the last few weeks we kept hearing interviews of Taarabt asserting his determination to avenge the loss suffered by the Moroccan national team in Annaba on March 27. Immediately after his decision to leave Morocco’s national team camp, he stated to the press that he has disagreements with the coach that prevent him from expressing his talent in the best way within the Moroccan team. The main reason behind his unexpected departure was allegedly the decision of Eric Gerets, Morocco’s national team manager, not to align him on the start-team in the upcoming match against Algeria.

There is no doubt  that this news came as a disappointment to Morocco’s national team fans who were hopeful that Taarabt would be in his best shape and contribute in helping the Atlas Lions reinforce their chances to qualify for the CAN 2012, to be co-hosted by Gabon and Equatorial Guinea . It turned out that this was just wishful thinking.

Now, this new “defection” raises once again two questions: was the decision made by Eric Gerets to discount Tarrabt for the upcoming match right, when we know that Taarabt is most prepared for this match judging by his performance with his professional team, the Queens Park Rangers? Is the decision made by Adil Taarabt acceptable?

One has to admit that the decision of Eric Gerets is way behind the mark and raises questions about the rationale behind it. It could have been acceptable if the manager had better players than Taraabt or players in better shape than him. Yet the truth of the matter is that among the players in the attack line that Gerets will align against Algeria, no one is in better shape than Taarabt. Whereas Adil Taarabt played a decisive role in helping the Queens Park Rangers, secure promotion to England’s Premier League by scoring 19 goals and providing his teammates with 18 decisive assists, the performance of the other Moroccan players likely to play this Saturday has been uneven at best, disappointing at worse.

Take for example the case of Marouan Chamakh. It is undeniable that in the beginning of his career with Morocco’s national team back in 2004, Chamakh imposed himself as one of the key players of the Moroccan team. That being said, over the last three years, the 27-year-old striker has been unable to score a single goal in an official match played with Morocco. Furthermore, after a successful start with his club, Arsenal, he has not played a single match with that team since last January, but has spent most of his time on the bench. Despite this lack of competition and his underachievement with the national team over the last three years, Gerets, for reasons that only he knows, keeps relying on him, even when there is another young striker, Youssef El-Araabi, who proved that he was the best-positioned to play instead of Chamakh.

The second case is that of Mbarek Bosouffa. The 27-year-old mid-fielder signed a contract with a Russian club, Anzhi Makhachkala on March 10th. Before his departure to Russia, Boussouffa did not play with his ex-team, Anderlecht, for three weeks and had to wait until the beginning of April to be back in competition with his new team. This means that before the first leg of the match between Morocco and Algeria on March 27th, Boussouffa was out of shape. Therefore, in the interest of the team, the manager should not have counted on him. Against all expectations, Eric Gerets decided otherwise, and everybody witnessed the poor performance of Boussouffa during that match.

It seems that the Moroccan national team manager bases his choices not on the current performance of his players, but rather on their past performance, or maybe even on their allegiance to him. However irresponsible the move of Taarabt may be, one can never understand why Eric Gerets decided not to count on one of the best contemporary Moroccan players, if not the best of them.

Now, all observers agree about one thing: no matter how unjust the decision of Morocco’s manager was, Taarabt should not have left his team at this critical juncture. It is true that he is one of the most talented Moroccan players and, he should, logically, be the first to take part in the upcoming match.

However, as a professional, he is well positioned to know that the decision of the team’s line up rests solely with the manager. The latter has every prerogative to decide on the start-team, and his choice ought to be respected. The manager has his reasons and, as a professional, Taarabat, was supposed to abide by the manager’s decision. Through his decision to leave the team on the eve of a critical and decisive match, Taarabt shows no respect for the Moroccan flag, let alone for the millions of Moroccans who supported him and loved him since the first time he played with the Moroccan national team.

He also proved his immaturity as a football player. Through his unwise move, Taarabt shows that he still has a long way to go before being able to rise to the level of legendary players, such as Zinedine Zidane, Ronaldo (Brazil) and Lionel Messi. The three players that I just cited have a common denominator: in addition to their extraordinary and astounding talent, they are known for their exemplary discipline, as well as their humility. These are the factors that, combined with their talent, helped them keep up the same level for a long time and made of them legendary stars loved by hundreds of millions across the globe. It is true that Taarabt has a superb talent, but it may not take him that far in the football world if it is not matched with professional discipline and humility.

This incident raises once again many questions about the strategy followed over the last ten years by the Moroccan Football Federation, which relies heavily on foreign-born Moroccans. By all accounts, this strategy has proved unfruitful and turned out to be one of the main causes behind the absence of the Moroccan National team from the World Cup since 1998. It is time that Morocco starts rethinking its short-term and long-term football strategy if we are to recover our erstwhile aura as a respected football nation in Africa and at the international level.

Now let’s just hope that this incident will not affect the moral of the Atlas Lions and that they will rise up to the expectations of millions of Moroccans who are hopeful to see their national team qualify without misshape to the 2012 Africa Cup of Nations and improve its international standing.