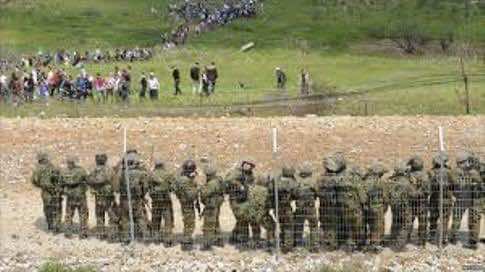 Israeli forces opened fire on Sunday to disperse protesters in Syria who had approached a border fence on the Golan Heights to mark the anniversary of the 1967 war, a Reuters witness said. It was unclear whether any had been injured.

Israeli forces opened fire on Sunday as Palestinian demonstrators in Syria neared an Israeli border fence on the Golan Heights in a protest marking the 44th anniversary of the 1967 Middle East war.

An Israeli military spokesman in Tel Aviv said soldiers, who had been on high alert along the Syrian and Lebanese frontiers in anticipation of possible border-breaching protests, fired warning shots. He gave no casualty figures.

A Reuters correspondent at the scene saw at least four demonstrators carried away on stretchers by the crowd, but it was not immediately clear if they had been hit by Israeli gunfire.

Israeli soldiers shouted warnings in Arabic through a megaphone for the demonstrators to stay away from the barbed wire fence, which had been breached in a similar protest last month marking the anniversary of Israel’s founding in 1948.

Thirteen people were killed on May 15 when Israeli troops tried to prevent thousands of Palestinians from overrunning its borders with Syria, Lebanon and the Gaza Strip.

On the Golan Heights, captured by Israel along with the West Bank and Gaza Strip in the 1967 conflict, several dozen demonstrators gathered in an anti-tank ditch facing the Israeli frontier. They waved flags, shouted slogans and threw stones.

Hours before the violence erupted, Israeli Prime Minister Benjamin Netanyahu said he had ordered Israeli forces to act with restraint, but with determination, to prevent any border breach.

There were no reports of incidents along the Lebanese frontier. In the occupied West Bank, about 100 Palestinian protesters marched to an Israeli military checkpoint, where soldiers fired tear gas and the crowd fled.