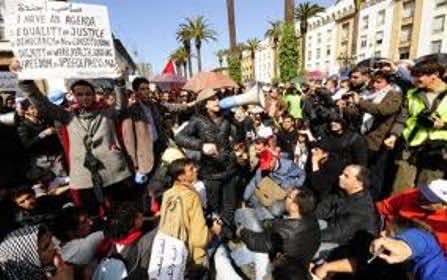 Thousands poured into the streets of Rabat on Sunday June 5 to condemn the death of a protester and to demand an end to the country-wide government crackdown on peaceful demonstrations.

“We are here today to protest the murder of Khaled al-Amari,” said a 40-year-old Rabat resident who did not give her name out of fear of the authorities. “But we are also here because we demand dignity, democracy and freedom. This repression must end.”

Last Thursday, 30-year-old Khaled al-Amari, a member of Morocco’s main opposition group, died after reportedly suffering a severe beating at the hands of police during a protest in the city of Safi. Officers deny that his death was a direct result of police violence, despite eyewitness accounts that he was severely beaten.

Police violence against peaceful demonstrators in Morocco has exploded in recent weeks, in what protesters say is a significant escalation of government repression.

The swelling crowd proceeded from the Old City down Muhammed VI Avenue, many holding pictures of Khaled al-Amari’s beaten face. Protesters chanted: “Down with despotism. We want freedom and dignity,” and “peace, peace, freedom is coming,” as they made their way to parliament. At many points in the march, protesters clasped each other’s hands, sat down in the street, or waved peace signs in the air.

“We are demanding democracy and dignity,” declared Mohammed Aghmaj. “The police are not being violent today because there was a martyr. But we know they have been violent in the past,” he said, referring to the relative calm at the demonstration.

The protesters are part of what has been termed the February 20 Movement, led largely by young people demanding pro-democracy reforms and an end to government corruption and repression – as well as an end to poverty and inequality. Launched on February 20 this year, the protests have swelled in conjunction with the so-called “Arab Spring” protests and revolutions sweeping the Middle East and North Africa. Gatherings continue regularly, culminating weekly in coordinated demonstrations throughout the country.

Many believe that the recent escalation in violence is meant to quash mass mobilisations before the July 1 referendum on reforming the constitution. The referendum itself was a concession offered by King Muhammed VI to the February 20 Movement protesters.

“Police have been given orders to break protesters’ legs and heads,” said Mohamed Elboukili, from the Moroccan human rights organisation Association Marocaine des Droits Humains [“Morrocan Association of Human Rights”]. “This is a very dangerous situation.”

Police violence against protests in several cities throughout Morocco on the past two Sundays have garnered international attention, with several images of police beatings captured on video. “According to the law, police must ask people to leave three times and give time for this,” explains Elboukili. “But the police don’t do this. They charge and beat people. In our opinion, this does not respect the right to peacefully demonstrate.”

Police violence has been accompanied by a crackdown on journalists. Last month, Al Jazeera was forced by the Moroccan government to cease broadcast operations in Rabat, with a ban on all land and satellite transmitters. Furthermore, Rachid Nini, editor of Morocco’s el-Massa newspaper, who has been outspoken against government corruption, was jailed for writing articles critical of Morocco’s security services and counter-terrorism law. Amnesty International has condemned the jailing as “a severe attack on freedom of expression”. Last Wednesday, dozens of his supporters gathered in downtown Rabat to demand that the government release him.