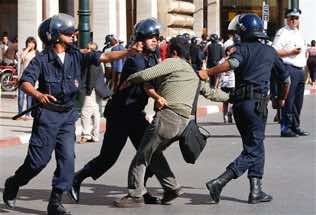 Hundreds of young Moroccans on Sunday flouted a government ban and held a peaceful pro-democracy rally in Rabat as authorities promised not to crack down on protesters, officials and demonstrators said.

Protests calling for reforms have shaken the kingdom since the beginning of the year amid popular uprisings across the Arab region, but have often been crushed by police.

An Interior Ministry official told AFP that “around 600 people participated in the demonstration but that police did not intervene.”

A security official said separately: “Unless protesters break things … we will not use violence,” adding that planned peaceful protests in Casablanca later in the day would be allowed to take place.

The government considers demonstrations illegal and justifies the use of force to break them up.

Security forces, which had been deployed since early Sunday in the capital’s main thoroughfares, withdrew at the start of the rally at 1000 GMT, an AFP reporter said.

“I am satisfied because violence was not used this time,” said Salma Maarouf, 22, a member of the February 20 Movement, a youth-dominated group leading a wave of protests inspired by revolts in other Arab nations.

“Authorities must have noticed that we are determined to make peaceful demands for real democracy,” she added.

Kamal Omari, another member, died Thursday in a hospital from wounds after police cracked down on a protest last Sunday in Safi, 350 kilometers (217 miles) from Casablanca.

Protesters shouted: “The murderers of Omari must be judged!” “For a democratic constitution” and “We want a constitutional monarchy.”

An official commission is expected to present proposals for reform to King Mohammed VI on June 15. The king has pledged to establish a clearer separation of powers and to boost the prime minister’s authority.

Last Sunday, dozens of people in Rabat and Casablanca were injured after police quashed a protest, triggering an outcry from the European Commission.