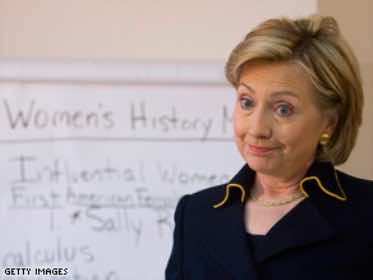 US Secretary of State Hillary Clinton gave a cool welcome Monday to a French plan to host a Middle East peace conference, saying it must be linked to a willingness to resume talks.

“The idea of any gathering, conference or meeting has to be linked to a willingness by the parties to resume negotiating,” the chief US diplomat said during a press conference with her French counterpart Alain Juppe.

“We strongly support a return to negotiations but we do not think that it would be productive for there to be a conference about returning to negotiations.”

Her comments coincided with violent protests that left at least 10 people dead along the Syrian ceasefire line on the 44th anniversary of Israel’s seizure of the Golan Heights, the West Bank and the Gaza Strip in the 1967 Middle East war in an event known in Arabic as the “Naksa” or “setback.”

Israel and the Palestinians have been at loggerheads over the negotiations, which came to a halt shortly after they were relaunched in Washington in September 2010 when a partial freeze on Israeli settlement construction expired.

Israel refused to renew the freeze and the Palestinians insist they will not hold talks while settlements are being built on land they want for their future state.

Palestinian president Mahmud Abbas has since insisted his participation in the Paris conference be conditioned on using the lines that existed before the 1967 Six-Day War as the basis for negotiating future borders.

“There has to be a return to negotiations, which will take a lot of persuasion and preliminary work in order to set up a productive meeting between the parties,” said Clinton.

“Right now, we’re still in a wait-and-see attitude because we don’t yet have an insurance form either party that they would return to negotiations.”

Juppe, who returned from the region last week, sounded an optimistic note.

“I am rather pleasantly surprised because the Palestinians have reacted positively, the Israelis did not say no and the secretary of state said ‘let’s wait and see,'” he said.

“The status quo does not benefit anyone. It bodes badly for the UN General Assembly” in September, at which the Palestinians are expected to seek official recognition for their future state, Juppe continued.

During his visit to the region, the French minister raised the possibility of France transforming a scheduled meeting of international donors into a broader peace conference to help relaunch stalled negotiations.

Clinton was due to later meet with a Palestinian delegation including negotiator Saeb Erakat followed by Israeli negotiator Yitzhak Molcho.