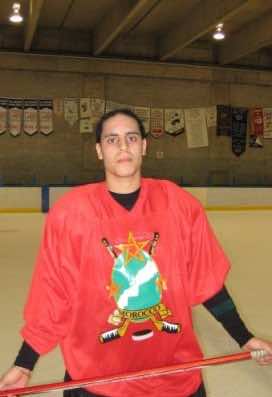 Last year, the team whose players live mostly in the French-speaking Canadian province of Quebec was officially recognized by the International Ice Hockey Federation, bringing the IIHF’s membership to 69 nations.

It was a huge victory, bigger than any on ice, for the nascent “Made in Canada” team whose players were infected with the hockey bug after immigrating to this country and then successfully exported it to their country of birth.

“We’ve written a page in history,” says El Farj, pointing to a flag of the National Hockey League’s Montreal Canadiens club that has pride of place amongst his collection of hockey jerseys and memorabilia.

“We brought this (Moroccan) jersey to the seat of the International Ice Hockey Federation and wore it in competition with the Russians, the Canadians and the Americans,” he said, eyes sparkling.

For the 37-year-old father of three who moved to Quebec at the age of 16 and only took up the sport three years later, “it’s a matter of great pride to play at the amateur level, but also stressful representing your country.”

It was a Canadian born in Morocco, Khalid Mrini, who came up with the idea to create a Moroccan national team.

When Mrini’s brother called him in 2005 to announce the opening of the first skating rink in Morocco, he first thought it was a joke. But then it seeded the idea to introduce hockey to Morocco.

“We’re amateur hockey enthusiasts. We tell ourselves: why not export it?” Mrini said. “It’s also a way to thank Quebec and to bring the province with me when I’m over there in Morocco.”

Morocco now has three ice hockey teams, 90 players and a national team that trains in Quebec. Its best players, such as Youssef Kabbaj, played in the Ontario junior league.

Bouhdid examines the national team jersey from every angle, smiling.

Tawfiq recalls the first time he donned the jersey: “I cried.”

In 2008, the team was formed to participate in a pan-Arab tournament organized by the United Arab Emirates. The players, most of whom have Canadian and Moroccan citizenship, returned home with bronze medals around their necks.

Tawfiq realized a childhood dream. At the age of five, encouraged by his father, he put on his first pair of skates.

“It was a way to understand Canada, its people, its culture,” he said. “When you play hockey seven days each week in winter, you get close to Quebecers, to Canadians, but you also never forget your roots in Morocco.”

On the ice, 15-year-old Talbi flies past, picks up the puck and shoots at the net. In the stands, his father, Abdellah Talbi, erupts with emotion.

Talbi remembers after the family arrived in Canada 10 years ago, his son’s insistence that he wanted to be registered to play in a local hockey league.

“I was afraid that he’d fall on the ice. To my surprise, he started doing figure-eights,” the elder Talbi said. “The entire family is proud of him.”

When he goes to Morocco, Tawfiq likes to see young players in the country.

“I’m jealous of them. I would have liked to have been a young Moroccan and seen big Moroccan hockey players,” he said. “It motivates, but we didn’t have such idols when I was young.”