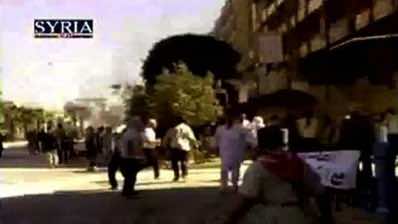 A deadly mutiny of Syrian soldiers and loss of control over a tense northern town appeared to show extraordinary cracks in an autocratic regime that has long prided itself on its iron control.

Details about the events in Jisr al-Shughour remained murky on Tuesday. The government said 120 forces were dead, without explaining the enormous loss of life.

But the reports Tuesday from residents and activists _ and the television appearance of a soldier who says he switched sides after his hometown was bombarded _ were the clearest sign yet that the weekly protests of thousands of Syrians are eroding President Bashar Assad’s grip.

The foreign minister of France, Syria’s former colonial ruler with whom Assad maintained good relations, said the president had lost his legitimacy to rule. British foreign secretary William Hague said Assad must “reform or step aside.”

Activists and residents of Jisr al-Shughour told The Associated Press that a number of soldiers joined forces with protesters after days of crackdowns in the region, leading to fighting with officers and security guards in which dozens were killed.

The Jisr al-Shughour resident said people were fleeing the area for the Turkish border about 12 miles (20 kilometers) away, fearing retaliation from a regime known for ruthlessly crushing dissent. The government vowed Monday to respond “decisively” to the violence there.

“People were struck by fear and panic after the government statements last night, it’s clear they are preparing for a major massacre,” he said.

Radwan Ziadeh, a Syrian dissident and a visiting scholar at the Institute for Middle East Studies at George Washington University, said the scale of the mutiny was unknown.

Ziadeh said the Syrian army was a strong institution “but in the end, the army is from the people. The outrage over the killings is growing and the longer it goes on the more deserters we’re going to see,” he said.

An alleged army deserter identifying himself as Lt. Abdul-Razzaq Tlass appeared on the Al-Jazeera television network Tuesday, saying he was deserting because of the regimes “crimes” all over the country. He called on other officers to protect protesters against the regime.

“Remember your duties,” added Tlass, who shares a last name with a former defense minister and said he was from the town of Rastan in central Syria.

Jisr al-Shughour drew the most recent assault by Syria’s military, whose nationwide crackdown on the revolt against Assad has left more than 1,300 Syrians dead, activists say.

A resident said tensions began last week with snipers and security forces firing repeatedly on peaceful protests and then funerals, killing around 30 people.

The resident said a number of soldiers ultimately defected, angered by the thuggish behavior of pro-government gunmen known as “Shabiha,” a fearsome name that some believe has roots in the Arabic word for “ghost.”

The resident, who spoke on condition of anonymity because he feared reprisals, said the gunmen were terrorizing residents and trying to stir up sectarian tensions.

Jisr al-Shughour is predominantly Sunni but there are Alawite and Christian villages in the area. The Alawite minority rules over Sunni majority in Syria.

“There was heavy gunfire and very loud explosions from across the river on Saturday and Sunday,” he said, adding he could not see what was happening from where he lives.

“We heard there were massacres, bodies thrown in the river.”

There have been sporadic reports since the uprising began of troops defecting and even reports of military units fighting each other, but if the government’s toll is confirmed, this would by far be the deadliest mutiny. Assad’s army has always been the regime’s fiercest defender.

In many ways, Syrians say, the Shabiha are more terrifying than the army and security forces, whose tactics include firing on protesters. Most Shabiha fighters belong to the minority Alawite sect, as do the Assad family and the ruling elite. This ensures the gunmen’s loyalty, built on fears they will be persecuted if the Sunni majority gains the upper hand.

A prominent activist outside Syria with connections to the area said many Syrians had taken to carrying weapons in response to the killings of protesters. But he said clashes over the past few days were mainly between supporters of the Muslim Brotherhood and Syrian security forces.

He said the weapons were smuggled from Turkey.

“The area is effectively outside the control of Syrian security forces now,” he said.

Jisr al-Shughour was a stronghold of the country’s banned Muslim Brotherhood in the 1980s. Human rights groups said at least 42 civilians have been killed there since Saturday.

Some activists also told of a mutiny, with a few soldiers switching sides and defending themselves against attacking security forces. Other reports said many Syrians also took up arms to defend themselves.

A resident of Jisr al-Shughour who spoke from a nearby village where he fled days ago scoffed at reports of armed resistance.

“Since the 80s, residents of Jisr al-Shughour are banned from possessing any kind of weapons, even a hunting rifle,” he said. “So how can there be armed resistance?”

Ammar Qurabi, head of the National Organization for Human Rights in Syria, said it was unclear how such a large number of officers were killed.

He said the likely cause was army infighting but added there may be cases of individual residents rising up against troops to defend themselves.

He blamed the government for not explaining: “The statements by officials are full of threats, rather than explanations.”

Turkish authorities said 35 Syrians wounded in the clashes were being treated Tuesday at Turkish hospitals after crossing the border from Jisr al-Shughour.

The Turkish Foreign Ministry said 224 Syrians were sheltering at a camp near the border and authorities were taking measures in case of an influx of refugees.

Syria’s government has a history of violent retaliation against dissent, including a three-week bombing campaign against the city of Hama that crushed an uprising there in 1982. Jisr al-Shughour itself came under government shelling in 1980, with a reported 70 people killed.