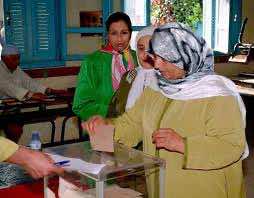 Polls opened in Morocco Friday for a referendum on curbing the vast powers of King Mohammed VI, who has offered reforms in the wake of pro-democracy uprisings in the Arab world, an AFP journalist said.

Polls opened at 8:00 am (0700 GMT) and were to close at 7:00 pm, after the king, faced with protests modelled on the Arab Spring uprisings, announced the referendum on a new constitution last month to devolve some of his powers to the prime minister and parliament of the north African country.

An AFP journalist at a polling station in Sale, a city close to the capital Rabat, said several dozen people were already in line at the start of voting.

Under the draft constitution, the king would remain head of state, the military, and the Islamic faith in Morocco, but the prime minister, chosen from the largest party elected to parliament, would take over as head of the government.

Analysts say there is little doubt voters will approve the new constitution, with the only question whether turnout will be high enough to ensure the referendum’s credibility.

Mohammed VI, who in 1999 took over the Arab world’s longest-serving dynasty, offered the reforms after the youth-based February 20 Movement organised weeks of pro-reform protests that brought thousands to the streets.

The reforms fall short of the full constitutional monarchy many protesters were demanding and the movement has urged its supporters to boycott Friday’s vote.