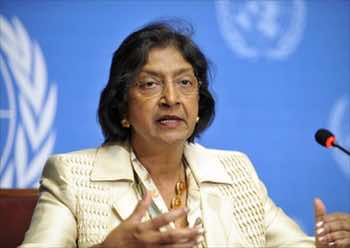 The top United Nations human rights official said today that the so-called Arab Spring across North Africa and the Middle East this year has shown that human rights are for “all of us, all of the time, everywhere.”

Navi Pillay, UN High Commissioner for Human Rights, told a press conference in Geneva: “The collective actions of the people of North Africa and the Middle East have reaffirmed the importance and universality of human rights in a way we could not have dreamed of on 1 January this year.

“We all want, we all deserve, and we are all entitled to have our rights observed – not partially, not sometimes, not at the whim of dictators or other repressive rulers and authorities, but all of us, all of the time, everywhere.”

“That,” she said, “is the message of the Arab Spring, and it is a message that has reverberated all across the world, stimulating discussion and dialogue, and renewed hope in the power of people to realize change.”

Previously, the High Commissioner noted, “the Middle East and North Africa was one of those areas where we had all been told the people had other preoccupations and were not particularly interested in human rights.”

She said the Tunisians and Egyptians “had blown that myth away,” leading citizens of other countries in the region wondering if they could do the same, and so the protests had spread.

“Several governments reacted in a violent and repressive fashion, leading to the loss of thousands of lives, torture, arbitrary detention, disappearances and other violations.”

But, the High Commissioner added, “the situation was different in Jordan, Morocco and Algeria, which also experienced protests, but in those countries the governments have responded with positive reforms.”

Ms. Pillay said that the new developments had coincided with the need for her office (OHCHR) to expand its activities in numbers and locations, which has left its resources “extremely stretched.”

She said her office’s budget is $202 million, reportedly about the same amount as Australians spend each year on Easter eggs or the cost of three F-16 jet-fighter airplanes.

“The amount Europeans spent on their pets in 2010 alone (€56.8 billion) would fund the entire UN human rights system, including my office, for something like 250 years,” she said.

The High Commissioner asked States to “devote much more to making human rights a reality.”

“Surely it makes sense to invest more heavily in human rights, and to back those brave protesters and human rights defenders in the Middle East, North Africa and elsewhere with much more than praise and fine