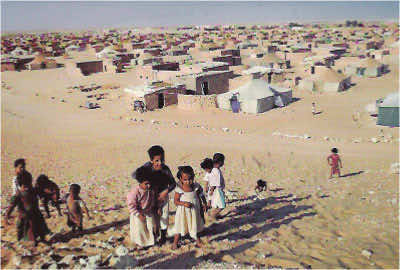 July 2, 2011- Several international organizations have expressed their worries concerning the massive campaigns of control, checks and arrest recorded against tens of Sahrawis in Tindouf during the last two weeks.

These campaigns operated by the militias of Polisario have been motivated – according to several sources – after the discovery of copies of the new constitutional draft of Morocco circulating in Rabouni camp and the camp of 27th February located in the area of Tindouf in the south east of Algeria. On this occasion, the Legal Watch Group on Western Sahara has solicited the UNHCR to act immediately and intervene to stop such illicit acts carried out by Polisario militias against Sahrawis in the Camps.

According to the letter sent by the WGWS to the UNHCR; Polisario militias have acted aggressively against the Sahrawis who have tried to express their will and to satisfy their interest to the new draft of the constitution – subject of referendum on July 1st -.

The letter has warned The HCR that such behaviours have been committed several times, and particularly in 2007; when the Polisario has implemented methods of Inquisition, detention and torture against all those who were caught in possession of the draft of the autonomy project for Western Sahara presented by Morocco to the UN as a background for negotiation with Polisario.

The letter has described such abuses as not encouraging the parties to increase the confidence-building as called for by the Security Council in its latest recommendations.

The letter elucidated that Polisario is playing a dangerous game alongside the regional security environment of the region either by suppressing the rights of Sahrawi refugees in Tindouf, or by launching an aggressive but legally ironic campaign  claiming that it  is not eligible for Morocco to exercise the referendum in the territory. But – the letter added-  that what the Polisario might ignore is that referendums on constitutions are legally not limited within territorial borders but concern human territoriality – related to the will of nationals wherever they live-.

The letter put in plain words also that in the case of Western Sahara, and regardless of the territorial sovereignty of Morocco over its own southern provinces, Madrid Accord, UN Charter, and the logic of Realpolitik in the area are all in favour of Morocco right to organize freely the referendum in Western Sahara where people are expressing their belonging to Morocco.
The Legal Watch Group on Western Sahara is a non-profit forum established in 2010 to follow-up Western Sahara legal issues. It was founded by a number of International Law experts, international relations professionals and researchers from Australia, Japan, Korea, Indonesia, Spain, Morocco and other countries, in order to monitor the behaviours against or impeding the confidence-building stressed by the Security Council and the international community as a prerequisite step to solve regional conflicts.