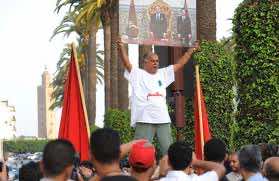 Morocco’s King Mohammed scored a landslide victory in Friday’s referendum on a new constitution he proposed to placate “Arab Spring” protests as voters defied critics who said it did little to curb his powers.

Preliminary results showed 98.5 percent of voters approved the text, Interior Minister Taib Cherkaoui said in a statement read out on state media, citing the count from 94 percent of polling booths.

The charter explicitly grants executive powers to the government but retains the king at the helm of the cabinet, army, religious authorities and the judiciary.

With a turnout put at nearly 73 percent, the result will be seen as a vote of confidence in the leader of the Arab world’s longest-serving dynasty. It will be closely scrutinised by Gulf Arab monarchies who have so far dodged domestic reform calls.

“We knew right from the start that the referendum will be in favour of the reform, but not necessarily for good reasons,” said Ouidad Melhaf, an activist within the so-called “February 20” street protest movement.

“Widespread poverty, illiteracy and fear of the state played a key role in the vote’s outcome,” she said, saying that the movement would relaunch its regular protests on Sunday.

The new constitution preserves a range of privileges for the monarch, such as his right to dissolve parliament—although not unilaterally as is the case now.

It falls far short of the demands of the protest movement, a mix of Islamists and secular left-wingers who want a parliamentary monarchy where the king’s powers would be kept in check by elected lawmakers.

The movement has failed to attract the mass support of popular uprisings that toppled the leaders of Tunisia and Egypt, and the fact that many Moroccans snubbed its call to boycott the vote could be a further blow to its credibility.

“I voted ‘yes’ because we have to obey the Commander of the Faithful,” retired agriculture ministry engineer Samira Denguir said in the middle-class Hassan suburb of the capital Rabat, referring to the king’s religious role.

“I’m not voting because I couldn’t get my voter card and to be totally honest I couldn’t care less. If they really mean good they would have done it years ago,” said market trader Younes Driouki, 29, heading to the beach with his surfboard.

A staunch Western ally, Morocco has stepped up cooperation against terrorism and illegal migration, notably with the European Union which is keen to avoid the spread of Islamic militancy along its southern shores.

The 47-year-old king has had some success in repairing the legacy of human right abuses, high illiteracy and poverty he inherited after his late father’s 38-year rule ended in 1999. Yet critics say there remains a wide disparity between rich and poor, and complain of human rights and rule of law failings.