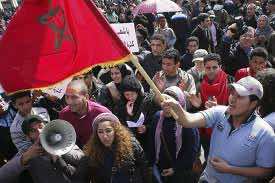 Pro-reform protesters were to take to the streets in several cities in Morocco Sunday in their first demonstration since voters overwhelmingly backed a new constitution curbing the powers of King Mohammed VI.

The protests, called by the youth-based February 20 Movement, were to start in the capital Rabat at 6:00 pm (1700 GMT) and in the main economic hub Casablanca at 7:00 pm.

The movement had urged its supporters to boycott Friday’s referendum on the new constitution and denounced the result — which saw 98 percent of voters back the reform — as a fraud.

A security source told AFP the authorities would not interfere with the demonstrations as long as protesters acted within the law.

“I would have preferred that these people, who say they are democrats, draw conclusions from the sovereign choice made by the Moroccan people,” Communications Minister Khalid Naciri, who acts as a spokesman for the government, told AFP.

“They have a duty to adjust their demands to the new reality… and make a positive contribution to the common creation of a new Morocco. Protesting in the streets should not be an end to itself,” he said.

Mohammed VI, who in 1999 took over the Arab world’s longest-serving dynasty, offered reforms after the February 20 Movement organised weeks of protests that brought thousands to the streets. They were calling for greater democracy, better economic prospects and an end to corruption.

Under the draft constitution, the king will remain head of state, the military, and the Islamic faith in Morocco.

But the prime minister, chosen from the largest party elected to parliament, will take over as the head of government. Other changes would grant more power to parliament, introduce an independent judiciary and provide new guarantees of civil liberties.