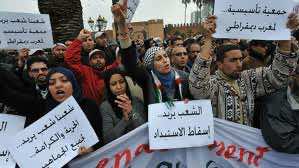 Around 1,000 pro-democracy demonstrators marched through the center of Morocco’s capital to protest a new constitution that they say fails to deliver sought after reforms.

The show of strength by the February 20 pro-democracy movement Sunday was the first major protest since Moroccans voted Friday to approve the constitution in a landslide referendum.

The movement, whose previous demonstrations across the country sparked King Mohammed VI to amend the constitution, denounce the new document as little more than democratic window dressing on a monarchy that continues to be absolute.

Organizers of the march in downtown Rabat promised other demonstrations in cities across Morocco.