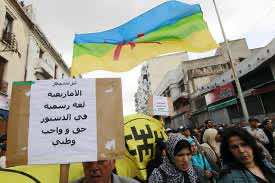 Driven to reform by protests earlier this year that were inspired by the fall of the Tunisian and Egyptian presidents, King Mohamed VI has successfully rewritten the constitution. Changes were made official in a landslide vote last Friday at some 40,000 polling stations across the country.

Now thousands of protestors are taking to Moroccan streets again, unimpressed by reforms that effectively relinquish a slew of royal powers over to elected officials. Some 4,000 marched the streets of Rabat, Morocco’s capital, and another 20,000 marched in Casablanca, according to one Reuters report.

Included in the reforms was a gesture to appease Berber activists. The Berber language or Tamzight was raised from national language to official language status, meaning that it will now be taught in Moroccan schools in addition to Modern Standard Arabic.

But the nation’s Berbers say the gesture won’t help their political marginalization in what they believe is an Arab-dominated government.

“This is a symbolic measure. But there are still those in government who have long worked against the integration of Amazighs (the Berber word for themselves) politically and these measures won’t do much about them,” said Ahmed Adghirni, the front man for the Berber struggle in Morocco, in a phone interview from Rabat, Morocco’s capital.