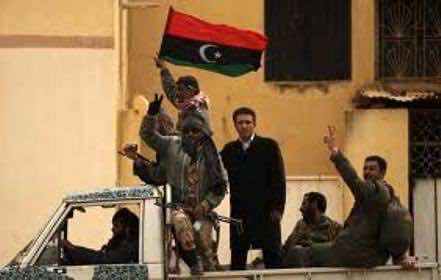 The Libyan government said on Monday that it was in talks with opposition figures but there seemed little chance of a swift end to the civil war as both sides stuck to entrenched positions on the fate of Muammar Gaddafi.

The leader’s son Saif al-Islam, in combative form, told a French newspaper there was no question of negotiating an end to his father’s 42-year rule, while the rebels, stepping back from a hint of a concession, renewed their demand that he go now.

A spokesman for Gaddafi’s administration said high-ranking government officials had been in foreign-mediated talks in Italy, Egypt and Norway with opposition figures to try to find a peace deal, and that talks were still going on.

Any talk of a possible accommodation with Gaddafi could drive a wedge into the ranks of the disparate rebel movement which sprang up in February in the wake of uprisings in neighbouring Tunisia and Egypt. Many of Gaddafi’s opponents are flatly opposed to any form of concession to the veteran leader.

The government spokesman named one of the opposition figures in the talks as Abdel Fattah Younes al-Abidi, Gaddafi’s former security minister who defected in February. But it was not clear whether the talks took place with the knowledge or endorsement of the leadership of the rebel National Transitional Council.

The Council, which a growing number of countries say is the Libyan people’s sole legitimate representatives, has said there are no talks between it and Gaddafi’s administration.

“In the last few weeks and in several world capitals, high-ranking Libyan government officials have met with members of the Libyan opposition to negotiate peaceful ways out of the Libyan crisis,” the government spokesman said in an e-mailed statement.

“Other direct negotiations still take place as of now.”

Saif al-Islam Gaddafi, one of the most prominent of the leader’s sons, dismissed suggestions that there could be a peace settlement that removed his father — a demand not only of the rebels but of the Western powers bombing Libya since March.

“My father is not part of the negotiations,” Saif al-Islam told Le Monde newspaper. “You think one can find a solution that does not involve him? No, it’s impossible.”

By backing the rebels, NATO had picked the losing side, he added: “God is with us. We will fight and we will win.

“We have our army. We have more munitions, more weapons. Morale is high. The others are becoming weaker and weaker.”

A glimmer of concession on Gaddafi’s future from the National Transitional Council on Sunday was swiftly withdrawn on Monday when the NTC, based in the eastern city of Benghazi, contradicted remarks made by its leader Mustafa Abdel Jalil.

He told Reuters on Sunday: “As a peaceful solution, we offered that he can resign and order his soldiers to withdraw from their barracks and positions, and then he can decide either to stay in Libya or abroad.

However, on Monday issued a statement by Abdel Jalil saying:

“I would like to confirm that there is absolutely no current or future possibility for Gaddafi to remain in Libya … There is no escape clause for Gaddafi — he must be removed from power and face justice.”

NATO says its air strikes are steadily eroding Gaddafi’s grip on power, but the fighting on the ground is making slow progress. The rag-tag force of rebel fighters is bogged down on three fronts and unable to break through to the capital.

In Misrata, a rebel-held city 200 km (130 miles) east of Tripoli, there was renewed fighting on the southern outskirts. Doctors told a Reuters journalist that two fighters had been killed, adding to two whom rebels said were killed on Sunday.

The closest rebel position to Tripoli is near the town of Bir al-Ghanam, about 80 km (50 miles) south of the capital. There, rebels say they are preparing an offensive, but there has been little movement for over a week.

“The situation there is relatively calm, the revolutionaries are preparing for the next days,” a rebel spokesman called Mohammed told Reuters from the nearby town of Nalut.