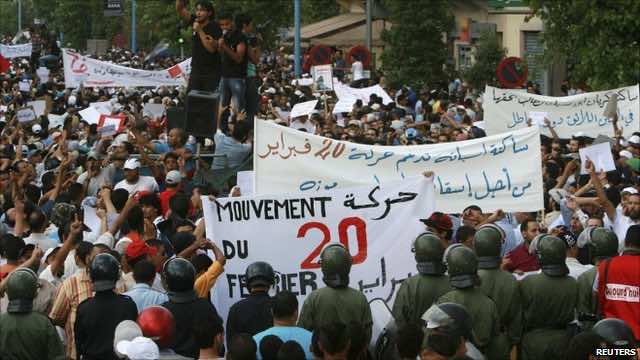 The official figures showing that 98% of voters backed Morocco’s reform referendum are “unbelievable”, a democracy campaigner has told the BBC.

Mountazar Drissi said there were numerous cases of multiple voting, while people were bussed in from the countryside to vote in cities.

He was speaking after thousands of people took to the streets on Sunday to demand further political changes.

“He can control everything – we want the power to belong to the people,” he told the BBC’s Network Africa programme.

The demonstrators marched through cities such as Rabat, Casablanca and Tangier, chanting slogans such as “The interior minister is a liar,” Reuters news agency reported.

They carried empty boxes to symbolise that they thought the turnout was far lower than the 73% announced by election officials.

There were also pro-government protests, which officials said outnumbered those organised by Mr Drissi’s 20 February Movement.

The king announced that he would give up some of his powers following previous protests but his constitutional reforms have been dismissed by some as “window-dressing”.

The concessions come after protests inspired by the so-called Arab Spring.

All the country’s main political parties, unions, civic groups, religious leaders and media urged Moroccans to vote in favour of the new constitution.

If the results are confirmed, the king will remain the head of state, the military, and the Islamic faith in Morocco, but the prime minister – to be chosen from the largest party elected to parliament – will take over as head of the government.

The king has pledged that the reforms will reinforce the independence of the judiciary, boost efforts to tackle corruption, guarantee freedom of expression and gender rights and make Berber an official language, alongside Arabic.

Mr Drissi stressed that he did not want the monarchy to be overthrown but he wanted a democratic constitution.

The reform plan has been welcomed abroad, with the European Union saying it “signals a clear commitment to democracy”.

Many activists have been sceptical about the king’s promises of change, saying Morocco’s 400-year-old monarchy has a long history of enacting superficial reforms.

Morocco has been facing severe economic challenges with high unemployment and rising levels of poverty.

King Mohammed, 47, acceded to the throne in 1999 following the death of his father, Hassan II, and now heads the Arab world’s longest-serving dynasty.