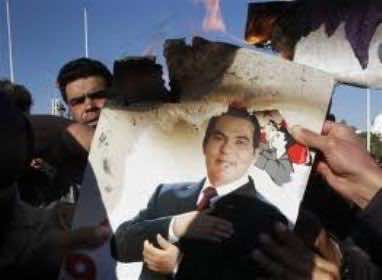 A Tunis court on Monday sentenced ousted Tunisian president Zine el Abidine Ben Ali in his absence to 15 years in jail for possession of arms, drugs and archaeological artefacts.

In his second trial, Ben Ali, who fled to Saudi Arabia following a popular uprising in January, was also sentenced to a fine of 54,000 euros (78,500 dollars).

The trial before a Tunis court had been scheduled to take place last week but was postponed due to a judges’ strike.

The former strongman and his wife Leila Trabelsi had already been sentenced in their absence last month to 35 years in prison for misappropriating public funds after large sums of cash and jewellery were discovered in a police search of their palace.

In Monday’s trial, Ben Ali alone was accused of harbouring drugs and weapons at his palace in the Carthage neighbourhood north of Tunis. He also faces a drug trafficking charge.

The presiding judge noted Ben Ali’s absence for the record. “The accused is not present and is a fugitive,” Judge Touhmi Hafi said.

Ben Ali’s attorneys pressed for another postponement to allow them more time to prepare their defence.

After their request was turned down, the lawyers stormed out, with Hosni Beji blasting what he called “the disregard for the rights of the defence”. Their exit triggered loud boos from the public.

“I am bitter. We did a good job. Our request for a delay is not a lawyer’s whim. This trial is tainted by irregularities,” Beji fumed.