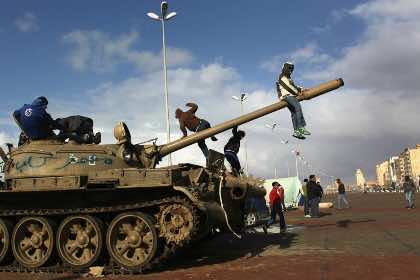 Libya’s rebels, increasingly confident on the ground, no longer need weapons drops from France, Paris said Tuesday, as a Russian official reported Moamer Kadhafi is conditionally ready to step down.

Meanwhile, NATO chief Anders Fogh Rasmussen said the alliance would like to see to see the United Nations assume the leading role in Libya’s transition to democracy in the event Kadhafi leaves power.

“There is emerging a political order distinct from that of Tripoli,” French Defence Minister Gerard Longuet said. “The (rebel) territories are organising their autonomy… That is why the parachute drops are no longer necessary.”

Last week, France said it supplied light arms including rifles and rocket launchers to the rebels for “self-defence” in line with a UN resolution and that it informed NATO and the Security Council of its plan to do so.

Longuet was cautious about the rebels’ chances of defeating Kadhafi in a major offensive they have said they are preparing on Tripoli.

They have a “growing capacity to organise politically and militarily” but are “currently not in a stabilised, centralised system,” he said.

On the diplomatic front, an unnamed senior Russian official was quoted on Tuesday as saying Kadhafi is ready to cede power in exchange for security guarantees.

“The colonel is sending signals that he is ready to cede power in exchange for security guarantees,” the respected business daily Kommersant quoted the official as saying.

The Russian source added that France appeared the country most willing to play a part by unfreezing some of the Kadhafi family’s accounts and promising to help him avoid trial at the International Criminal Court in The Hague.

On Monday, Libyan Deputy Foreign Minister Khaled Kaaim had said contacts between Tripoli and rebel-stronghold Benghazi were continuing across several cities in Europe in order to seek a reconciliation and avoid bloodshed.

Russia has advocated the AU taking a leading role in negotiations to end the conflict, and Zuma, highly critical of NATO air raids, told Medvedev he hoped the alliance would better appreciate the AU’s concerns.

One of the new elements in the road map agreed by the AU on Friday included provisions for a multinational peacekeeping force organised by the United Nations.

But the rebels have thus far rejected the AU’s settlement terms and Russia has also failed to convince Kadhafi to leave.

“There is absolutely no current or future possibility for Kadhafi to remain in Libya,” said National Transitional Council chief Mustafa Mohammed Abdel Jalil.

“There is no escape clause for Kadhafi — he must be removed from power and face justice,” Jalil said in a statement.

The talks are to prepare the ground for a meeting of the International Contact Group on Libya, scheduled for July 15-16 in Istanbul, the diplomat told AFP.

The increased diplomatic activity comes amid a toughening Turkish stance on Libya after Ankara’s initial criticism of the Western air strikes.

On Sunday, Davutoglu visited Benghazi, recognised the NTC as “the legitimate representative of the Libyan people” and offered $200 million in aid.

Meanwhile, Rasmussen is to meet Libyan opposition members in Brussels next week, an alliance diplomat said Tuesday, their first invitation to NATO headquarters.

Speaking in Saint Petersburg on Tuesday, Rasmussen said “to accommodate the legitimate aspirations of the Libyan people, it is necessary that Kadhafi leaves power.

“After that, it is necessary to ensure a transition to democracy… We want the United Nations to take the lead in this effort.”