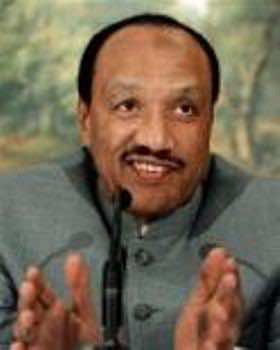 FIFA’s Ethics Committee will meet on July 22-23 to decide the fate of suspended Asian soccer chief Mohammed Bin Hammam over the alleged bribery scandal at the Caribbean Football Union meeting in May, world soccer’s governing body said on Wednesday.

The Zurich meeting will be convened on July 22, four days later than originally scheduled, with the ruling handed down on Bin Hammam and two other officials the following day.

The Qatari, who withdrew from the FIFA presidential contest against Sepp Blatter in the wake of the allegations, is expected to give evidence along with CFU officials Debbie Minguell and Jason Sylvester, who were all provisionally suspended by the Ethics Committee on May 29.

FIFA said the three officials had received the report on the investigations conducted by the Ethics Committee since May 29 and have been invited to present their position in writing prior to July 22.

Bin Hammam is facing allegations that he attempted to bribe members of the CFU in order to secure their votes in the June election against Blatter at a meeting held in Port of Spain, Trinidad on May 10-11.

Minguell and Sylvester are charged for breaching FIFA’s Ethics Code.

The committee will be chaired by Petrus Damaseb of Namibia.