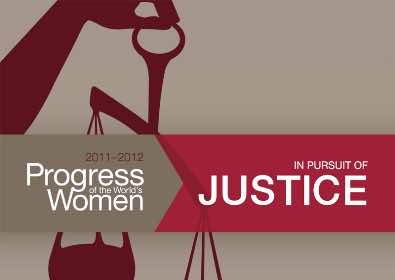 Millions of women worldwide continue to experience injustice, violence and inequality in their homes, the workplace and public life, according to a new United Nations report that calls on governments to take urgent action to ensure real equality between the sexes.

“Progress of the World’s Women: In Pursuit of Justice” is the first major report by UN Women, the agency launched earlier this year to spearhead the world body’s efforts towards gender equality and women’s empowerment.

The flagship report states that the past century has seen a “transformation” in women’s legal rights, with countries in every region expanding the scope of women’s legal entitlements. “Nevertheless for most of the world’s women, the laws that exist on paper do not translate to equality and justice,” it adds.

It also points out that while 139 countries and territories now guarantee gender equality in their constitutions, women continue to experience injustice, violence and inequality in their home and working lives.

“With half the world’s population at stake, the findings of this report are a powerful call to action,” said Michelle Bachelet, Executive Director of UN Women. “The foundations for justice for women have been laid: in 1911, just two countries in the world allowed women to vote – now that right is virtually universal.

“But full equality demands that women become men’s true equals in the eyes of the law – in their home and working lives, and in the public sphere,” she stated.

UN Women calls on governments to take a number of steps to end the injustices that keep women poorer and less powerful than men in every country in the world.

These include repealing laws that discriminate against women; employing more female police, judges, legislators and activists on the “frontline of justice delivery;” and investing in “one-stop shops” where women can access justice, legal and health services in one place.

Among the findings of the report is that while domestic violence is now outlawed in 125 countries, 603 million women worldwide live in countries where it is not considered a crime. Also, women are still paid up to 30 per cent less than men in some countries, and some 600 million women are employed in vulnerable jobs that lack the protection of labour laws.

The report also finds inadequate enforcement of existing laws across the board. Many women, says UN Women, shrink away from reporting crimes due to social stigma and weak justice systems.

The prohibitive costs and practical difficulties of seeking justice, from travel to a distant court to paying for expensive legal advice, leads to high drop-out rates in cases where women seek redress, especially on gender-based violence, the agency notes.

“By changing laws and giving women practical support to see justice done, we can change society and ensure women and men enjoy real equality in the future,” concludes the report.